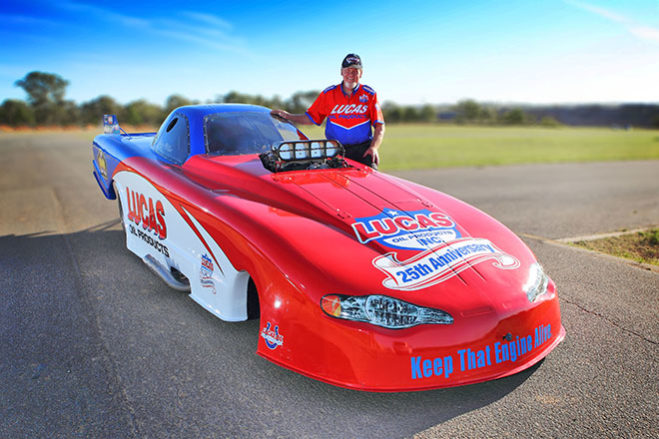 Phillips, primed to take his 17th Top Alcohol championship, which would make him Australia’s most successful drag racer, said the new livery was a reflection of his title aspirations – and finishing the season on a high.

“The Lucas Oil Funny Car looks great, and if it goes as quick as it looks we will be in good form this weekend,” said Phillips, who goes into the final round 61 points ahead of his nearest rival Steve Ham

“It also really highlights our strong relationship with Lucas Oil, who has been an integral part of our success for a long time now.”

The Queensland-based racer is preparing for this weekend’s title showdown by testing today at Sydney Dragway, though Phillips is taking no risks.

“We’re only going to do launches; no full runs,” said Phillips, who holds the Top Alcohol Funny Car national record – a 5.424-sec Elapsed Time for the standing quarter mile, set back in June.

“I just want to run some early numbers that we haven’t been able to try because we’ve been pushing to win the championship.

“It’s a perfect opportunity to pick up something before the weekend gets started. The Lucas Oil Funny Car is as fast as anyone around Sydney Dragway, hence why we’ve got the record. But I think there’s room for improvement.”

“If I do everything right, the championship will take care of itself.

“The first test is qualifying. There are 12 cars fighting for an eight-car field, and there’s just no guarantee that you’re going to be around on race day. You have to earn your spot, and take it step by step.”

Along with his 17th Top Alcohol championship, Phillips is also chasing his 12th Australian Nationals win.

“There’s no doubt about it, this event is the oldest and most prestigious on the calendar – and it’s one that a lot of people struggle to win even once. So to have 11 wins means that we must be doing something right.”

Qualifying for the Aeroflow Sportsman Drag Racing Championship gets underway on Friday October 31st from 9am with eliminations to commence from 10am on Saturday November 1 and continue through Sunday November 2 from 9:45am.