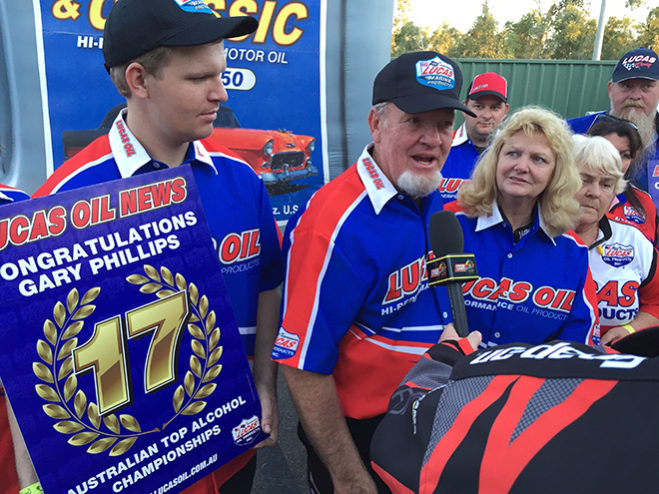 Lucas Oil’s Gary Phillips is celebrating wife Debbie and son Cheyne’s birthdays with an unprecedented 17th ANDRA Top Alcohol championship, despite controversially not being able to compete in the Fuchs Winternationals.…

Lucas Oil’s Gary Phillips is celebrating wife Debbie and son Cheyne’s birthdays with an unprecedented 17th ANDRA Top Alcohol championship, despite controversially not being able to compete in the Fuchs Winternationals.

Phillips was sidelined after an accident in Friday night’s first round of qualifying which saw a fitting come loose and spray fluid under the rear tyres, sending him hard left into the wall.

Despite having a spare car on hand, Phillips was denied continuing in the event by the sport’s governing body, ANDRA.

Forced to watch from the grandstand, Phillips was at the mercy of rival John Canulli – who entered the event just 68 points behind. After taking the #1 qualifier spot, he had to make the final in order to deny Phillips the crown again.

“It’s an achievement in itself. No one else has won 17 Top Alcohol titles in the sport’s history,” Phillips said.

“It was hard to win it like that, watching on with no control. Not being able to use the second car was like heading into a gunfight with no bullets.

“It was more nerve wracking than when you race. Everyone takes shots at you but your hands are tied, you can’t come back at them.

“The ANDRA rules say you can swap everything but the chassis in competition, which we interpreted as eliminations, not qualifying.”

Phillips said he’s thrilled to carry regain the coveted #1 ahead of season 2015/16.

“The car was competitive all season, so it was just bad luck to have a fitting come loose and put fluid under the tyres.

“We’ve got a lot to do ahead of the opening round in Darwin next month, but we’ll be chasing title number 18.”