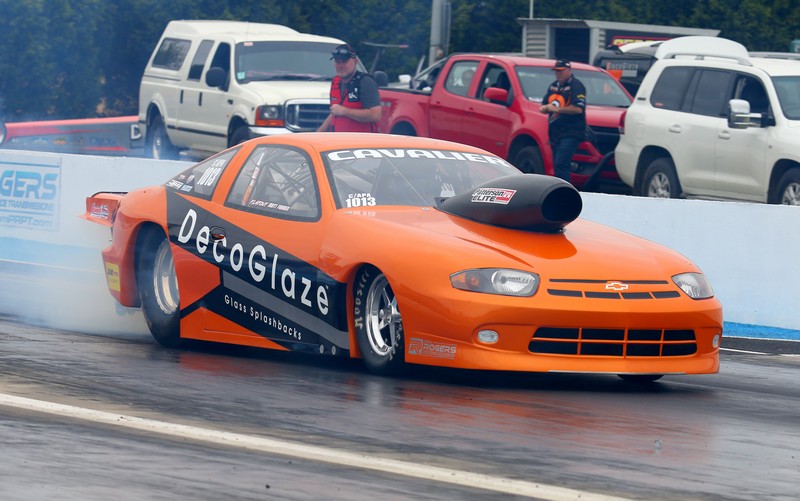 Forbes is currently the only competitor on maximum points (300) in the Super Stock bracket with just the ANDRA Grand Final to be run; leading Graeme Simms (220), Errol Quartermaine (210) and Louis Svingos (200) in the standings.

Back-to-back victories at Portland’s South Coast Nationals and South Coast 660 have put the racer in the box seat and he could not be happier.

“It has been an extremely rewarding season so far on a number of fronts and we couldn’t be happier with where we are at,” Forbes said.

“We are continuing to learn and gain experience as a team which is great. Our team has always approached our racing with a confident and positive attitude and that comes from doing the hard work away from the track and trusting the process.

“We will continue to do our best on and off the track and hope that it’s enough to secure the Summit Racing Equipment Sportsman Series Super Stock Championship, and if we fall short we will come back and try again as we are very passionate about our racing and plan to continue well into the future.

“I have the utmost respect for everyone out there giving their all because it takes a huge commitment to compete at any level. The Super Stock racers I have raced with in my rookie season have been really good to me and I appreciate that.

“A lot of these racers have been around the block and know the ropes, so to have them welcome us into the group and encourage our team is something that has blown me away. These teams are fierce competitors and rivals on the track but there is a lot of respect in the pits.”

While Forbes is a Super Stock rookie, he is far from new to the sport of drag racing. The Director of Ballarat Memorials has been a part of ANDRA’s drag racing community since 1994 and has taken out three national championships (2013 and 2014 in Super Gas, 2016 in Modified) as well as the 2016 John Storm Memorial Trophy.

Before making the move to Super Stock for the 2019/2020 season, Forbes was most recently a regular in the Top Sportsman ranks.

“Super Stock is certainly a different discipline to the brackets I have raced in previously and it is a big challenge. Every ANDRA bracket is just so tough at the National Event level and we have been working towards competing in Group Two/Super Stock for quite a few years now,” Forbes explained.

“When the decision was made, my long-time friend and mentor Craig Geddes said to me with a laugh ‘now you’ll realise how much you don’t know!’ He was so right! There is just so much to learn and we are enjoying being a part of it.

“The category has such a rich history which has been created by exceptional racers who have pushed the performance envelope – just being able to compete in Group Two is such a highlight for me. I still go to the track and appreciate every opportunity I have to compete at this level.

“It would be easy to say the wins have been the best moments of this season so far but in reality they are just a result of the process and having a bit of luck along the way. The best moments or highlights for me are all of the small things like meeting new people, understanding new things about our car, having a first round win, spending time with our team and seeing their joy when we’ve had some success.”

Unsurprisingly, Forbes has a list of people he would like to thank for their support of his racing.

“We could not operate at this level without the support of some key people,” he said.

“Our team is very well-rounded with each person offering a different perspective.

“Without the support, advice, encouragement and resources of Craig Geddes and Rob Martin of Decoglaze Glass Splashbacks Central Victoria we wouldn’t be in the position we are.

“I also want to thank Paul Rogers Performance Transmissions; Andy from Lucas Oil; Jax Tyres and our crew – Gilbert Nichele, Les Waight, Paul Rogers, Dobby Reid, Max Fiumara, Geoff Chaisty, Dave Curtis and Andrew Waight – as well as everyone else that has supported or encouraged us over the course of the season.”

While the ANDRA Grand Final for the 2019/2020 season is yet to be run, Forbes and his team of supporters are already looking ahead to the 2020/2021 Summit Racing Equipment Sportsman Series.

“We can’t wait to finish this season off and we will then start fresh. We have just completed a new engine for E/APA so we would like to develop that over the new season and just see what the future brings,” he said.

“Craig (Geddes) and I are having some crazy conversations about racing opportunities every day!” he laughed. “We are certainly throwing lots of ideas around as we are both extremely passionate and want to push ourselves as hard as possible. We have a remarkably similar attitude and energy so it is good to have someone who is as equally committed to throw ideas at, even if sometimes we are not making sense!

“Competing in Group Two is a huge challenge and that is where we will be….unless a ‘400 cubic inch/5 speed’ comes along,” he teased.