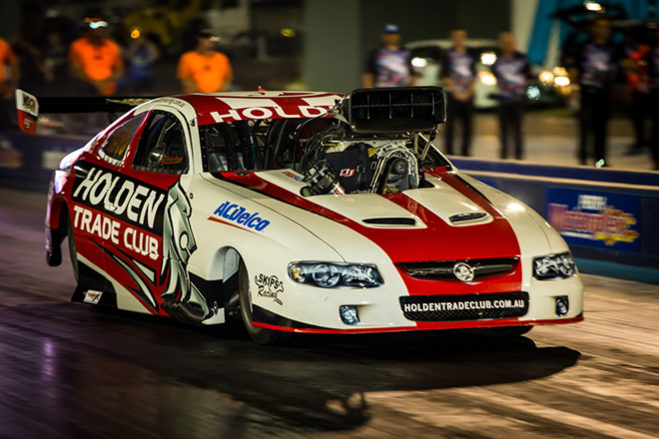 If not for a malfunctioning piston in the final of the opening round against seven-time champ John Zappia in Perth, Fabietti would have taken the spoils and an early championship lead having got the reaction advantage on the start line.

“I probably got a little greedy in the final and we smoked a piston at 4.8 seconds but we were in front at that stage,” he said.

Back in Perth for Round 2 at the 44th Westernationals, a dramatic holeshot win for Peter Kapiris saw Fabietti dumped out at the semi final stage but that showing put him in second place on 152 points, 83 points behind Zappia heading into Adelaide.

“(The) last appearance in Adelaide (at the Fuchs Spring Nationals) we had an ignition problem that we couldn’t fix on the day and we still ran pretty good,” said Fabietti.

“AIR seems to suit my car so with the ignition fixed I think we should be a threat. AIR is an old surface and it cannot take all the power of the major tracks so it’s a tricky track to master.”

Although challenging, Fabietti is confident he in fact has the track mastered predicting he could cover the 1000 feet surface in 4.90 to 5.0 seconds.

That is quicker than anyone could manage back in October but now Fabietti is back at the helm tuning as well as driving, he feels he has a pretty good handle on the race car.

“Now that I am back to tuning the car myself it has taken a few meetings to get the car sorted out but it is responding well. Now I just have to get the driver sorted out!”

Top Doorslammer is just one of four ANDRA Drag Racing Series brackets alongside Top Alcohol, Pro Stock and Pro Stock Motorcycle to headline the VPW Pro Series 1000 at Adelaide International Raceway on the weekend of March 14-15.

The event will also serve as Round 3 of Summit Racing Equipment Sportsman Series.

Action gets underway from 9am both Saturday and Sunday. For more information please click here.