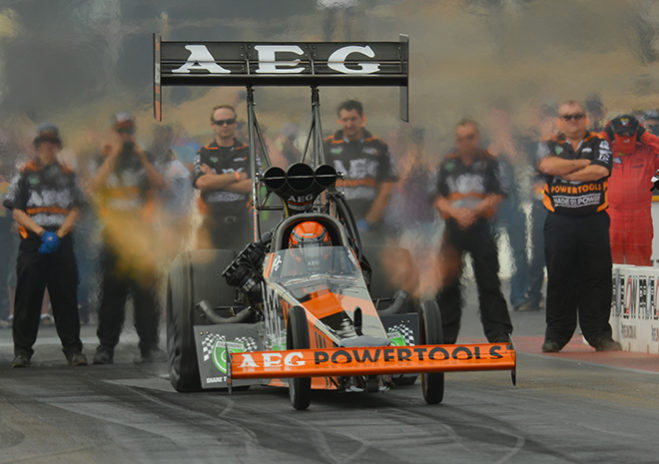 A huge crowd filled the grand stands to almost capacity consisting of many new spectators to the sport as well as seasoned drag racing fans.

Fans were treated to side-by-side passes each day over 1000ft.

The two Top Fuel teams ran twice on the Saturday at 4pm and 8pm with Darren Morgan’s AEG Powertools dragster breaking the track record with a 4.11 at 275.9mph on the second pass.

“It was awesome for our crew and sponsors to break the track record,” Morgan said.

“The crowd were outstanding and really appreciative, which was fantastic,”

“It was great to see the venue was filled to almost capacity.”

South Australian residents were treated to their local Channel 7 weather news broadcast on Saturday night, live from the DMR pits.

On the Sunday racing fans got close and personal as the two teams performed their start up simultaneously in the pits to ‘bring back the blip’ before completing their final pass at 1.30pm.

To view photos and videos of the runs from the weekend head over to Darren Morgan’s Facebook page at www.facebook.com/TopFuel