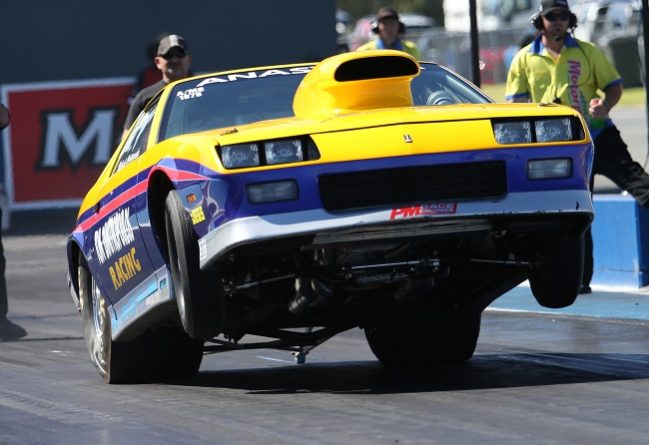 Next weekend at his home track of Adelaide International Raceway, local racer Tom Dimitropoulos will be doing all he can to snatch the 2017/2018 Summit Racing Equipment Sportsman Series title for the Super Stock category. Dimitropoulos is currently second on the points ladder, 40 points behind the l…

Next weekend at his home track of Adelaide International Raceway, local racer Tom Dimitropoulos will be doing all he can to snatch the 2017/2018 Summit Racing Equipment Sportsman Series title for the Super Stock category.

Dimitropoulos is currently second on the points ladder, 40 points behind the leading Jim Ioannidis.

After running under the national record marker at the series’ last round in Perth earlier this month, Dimitropoulos says he has the speed and the crew to make a good showing of it next weekend.

“We put a new crew together back in January at the Portland round and since then things have been coming together really well,” explained Dimitropoulos, who thanked crew members Michael Zotti, Matt Vandersluys, Con Gunna and his brother “the Rooster” for their support.

“Before then we had been struggling with the speed to the 60-foot mark, but now we have found that again and it is such good timing with the Grand Final coming up.

“We have some more things we want to do, some new shocks to put in it before next weekend and so on; we are very excited about next weekend in Adelaide.

“For us, there is no pressure for the championship – points-wise we are 40 points away from the leader and he is pretty fast, but stranger things have happened. It is drag racing after all and we all know that anything can happen.

“If we can go well in Adelaide, we might just be able to take the championship away – Jim won in Mildura, Portland and Perth, he has one hand on the trophy, but he needs to finish it off – so I guess we will see what happens on the day!”

When it comes to the speed of the car, Dimitropoulos is confident he could reset the national record in Adelaide, if he wants to.

“The conditions in Adelaide are likely to be better for the car than they were in Perth. We reset the record last year, and I think we can reset it again this year if we have to – the thing is, I don’t race for records, I race for the trophy,” Dimitropoulos said.

“Hopefully it all falls together in Adelaide!”