Damien Harris all about the championship

Damien Harris all about the championship 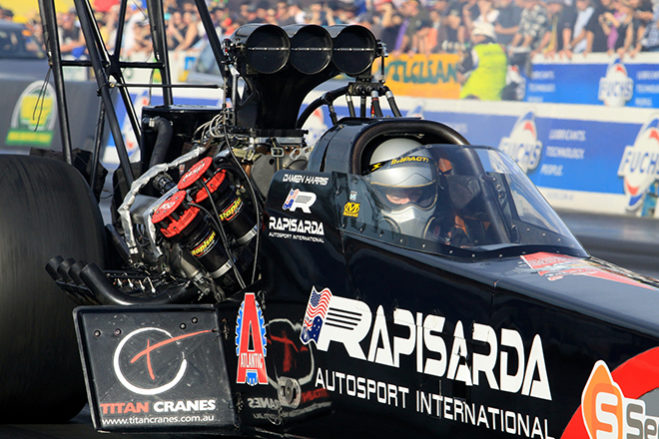 Rapisarda Autosport International have long been one of the most impressive teams in Australian drag racing, but a national Top Fuel championship has not come their way since Steve Read won one for the team in 2002.…

Rapisarda Autosport International have long been one of the most impressive teams in Australian drag racing, but a national Top Fuel championship has not come their way since Steve Read won one for the team in 2002.

Fast forward 12 years and the team is now vastly more experienced, having made a big impact in the NHRA scene and still the holders of the quickest pass in Australian Top Fuel history at 4.503 seconds.

Western Australian Damien Harris has been driving for RAI since 2012 and said more than anything he wants to be able to hand an ANDRA championship trophy to team owner Santo Rapisarda – and taking victory at Washpod Nitro Max on February 28-March 1 at Perth Motorplex would be the perfect start.

“Our focus is purely on points. Winning is what we want but we need to collect as many points every round,” he said. “With a short season you don’t have many opportunities.”

Harris said with the unique format of Washpod Nitro Max, where two individual championship events take place over two nights using one hit qualifying, an elimination round and a final (also known as the three round format), there is no room for error.

“The three round format doesn’t give you any time to make mistakes,” he said. “We had an opportunity to come second in the championship last year and some decisions we made through the year weren’t really the right ones, so now we are aiming to maximise our point collection each time.”

Harris has recently spent time in Sydney testing with the team, including crew chiefs Santino Rapisarda and Santo Rapisarda Jr, as they aim to get their new equipment on point and also hinted that people might want to get to Perth Motorplex early on the Saturday of Washpod Nitro Max for an official test session scheduled for 2:00pm.

“Testing was positive, we made some changes in the clutch system and also the top end of the motor to try and make that a little bit more resilient,” he said. “The motor came apart clean and the clutch changes are really promising so we are now looking to come to Perth and do the 2pm test lap and go out there and see what it will hold.”

As if the pressure of championship expectations were not enough, Harris will also be racing at his home track with all the demands that come of that too, but he said it will be enjoyable.

“It’s a bit of a distraction but it’s a good distraction,” he said. “It can get a bit harder with family and friends around wanting a piece of your time. But I do like coming home and racing.

“I’m in a fortunate position where I don’t do truckloads these days on the car so I get to chill and focus on really relaxing. I did the Frank Hawley Drag Racing School in 2001 and one of the key things that Frank teaches you is relaxation and focus.”

In intra-team news, Harris has picked up a new teammate for this season, with Sydney’s Wayne Newby making the move from Top Alcohol to Top Fuel.

Harris said his former Top Alcohol rival would be a boon for the team.

“I think for the Rapisarda boys themselves having Wayne in Sydney is a great asset to them with his machine shop and his knowledge,” he said. “It’s a great asset to help them prepare the car. For me personally I have known Wayne through the Top Alcohol days and he and I get along well.”

Harris will be driving one of six Top Fuel dragsters in attendance for the opening round of the ANDRA Drag Racing Series, taking on reigning national champion Phil Lamattina and brother John, Rapisarda Autosport International teammate Wayne Newby, Chemical Warfare pilot Anthony Begley and ‘Nitro Madman’ Mark Sheehan in his all new, state of the art canopy dragster straight out of the USA.