Chris Matheson takes runner up, looks forward to next year

Chris Matheson takes runner up, looks forward to next year 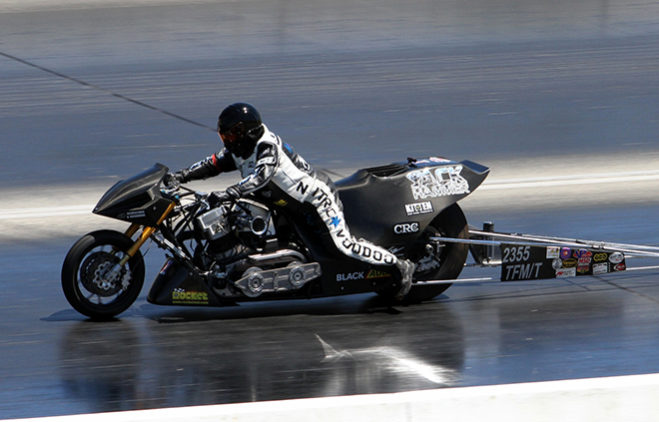 Matheson had a chequered season after his accident last year, crashing at Sydney Dragway at over 231 mph. The three-times champ said he missed the first three rounds of the 2014 season due to follow up surgery, as a result of his injuries but he remained strong to clinch the runner up spot.

“It has been a challenge with only a total of seven rounds to chase down front runner Mark Drew, it was going to be difficult,” he said.

“Winning the Winternationals mid-season, running the lowest ET in Australia and a couple of top qualifiers were certainly some highlights, however, being electrocuted at Hidden Valley and ending up in hospital, was a real low point.”

“Despite the lack of on track time and the mediocre results, we did have a chance to improve our position as we progressed through the remaining Championship rounds.”

Unfortunately, leading up to the Australian Nationals, Matheson’s regular Nitro Voodoo Multi Cylinder machine required new crankshafts, that were not going to be completed for the Nationals.

With his never give up approach, Matheson decided to pull out all stops to try to improve the team’s position in the points deciding to break out his former world record breaking Nitro Harley V-Twin purchased from multiple American champion Doug Vancil back in 2012.

Vancil’s Bike was no slouch, previously holding the World V-Twin Record, it had run multiple 6.2-second passes at over 230 mph and until recently, held the quickest half-track pass on a Twin, of 4.07 seconds.

Matheson said due to the lack of time leading up to the Australian Nationals, it was a frantic effort from team members to ready the bike in time without testing to ensure that they would be competitive.

“Qualifying was riddled with rain and wind squalls, so we didn’t risk running, knowing that we had pre-qualified due to the depleted field. Come race day, we had to get down the track and that we did.”

Despite the first round loss to a fuel shut off valve prematurely activating at approximately three seconds into the run, the bike showed why it was a Championship winning machine in the American Top Fuel Motorcycle scene for many years, even if it was short-lived

The machine launched hard and straight, quickly catching his opponent, clocking a respectable 1.1-second 60ft tine, only to shut off just before the 330ft mark, ending his chances to win.

Despite the early exit, Matheson had taken enough points to ensure second place in the Championship.

He praised his Team for their effort, especially long-time friend and crewman Graeme Turner, who was instrumental in helping Matho to claim the Championship runner up.

“The Nitro Twin, affectionately called the Jack Hammer, is a lot of fun and will be a formidable weapon in next year’s ANDRA Drag Racing Series Championship points chase.

“Well done to Mark Drew and his team for taking out this years Championship and commiserations to outgoing Champion Chris Porter and his team from Bad Bones Racing.