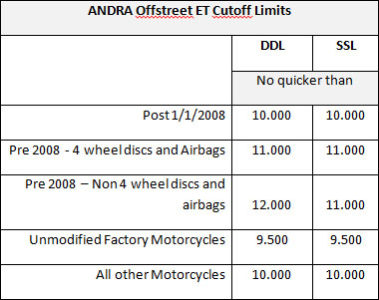 The Australian National Drag Racing Association is set to make big changes to its rules for street cars, with modern ‘street registered’ vehicles being permitted to run without roll cages down to a limit of 10.00 seconds for the first time.…

The Australian National Drag Racing Association is set to make big changes to its rules for street cars, with modern ‘street registered’ vehicles being permitted to run without roll cages down to a limit of 10.00 seconds for the first time.

Under the new safety rules, vehicles manufactured post January 1, 2008 will be able to run as quick as 10.00 seconds and as fast as 140mph (225.30kph) (whichever is the lesser) for the quarter mile without a roll cage.

ANDRA technical manager Steve Power has commissioned various reports on safety developments in modern street vehicles and, importantly, how these translate to the drag strip.

“For some time there has been debate on the suitability and application of later model safety improvements and related restrictions,” he said. “There was merit in the theory, corresponding ADRs and improvements in safety ratings all suggested manufacturers were headed in the right direction for ‘on street’ safety standards. However there was a significant gap between ‘on street’ performance and ‘off street’ racing.”

In early 2013 ANDRA commissioned a number of tests and computer simulations to be conducted and certified by a recognised engineering firm. The goal was to get a thorough understanding of not only modern safety features and how they would relate to a higher speed incident, but also how older cars could be brought up to a safe standard while not compromising some state registration requirements.

A full presentation and accompanying certification was considered by the ANDRA board and approval was granted for the implementation of new standards in regards to late model (01/2008) cut offs.

“Many modern vehicles are capable of covering a drag strip very quickly but also safely and we hope that people who have previously worried about having to extensively modify brand new vehicles will now be able to race in a safe and legal environment,” Mr Power said.

Street registered, sedan-based vehicles (and derivatives such as utilities and wagons) with a compliance identification plate of at least 01JAN2008, will be allowed to run down to 10.00 seconds and 140mph, whichever is exceeded first, under the following conditions:

• Late model vehicles with a high centre of gravity (such as SUVs and vans) do not meet the definition for sedan-based vehicles and as such are not accepted.
• Vehicles must be enclosed, no convertible-style vehicles permitted.
• Prohibited modifications include: any alteration to structural parts of the vehicle, floor pan alteration, firewall alteration, wheel tub modifications and any alteration to ADR safety items.
• Vehicles may use OEM modern three point seatbelts using pre-load tensioners will be acceptable. Harness seatbelts of 4pt, 5pt or 6pt design are also acceptable.

If you have any queries about the changes, please email Steve Power at steve.power@andra.com.au. 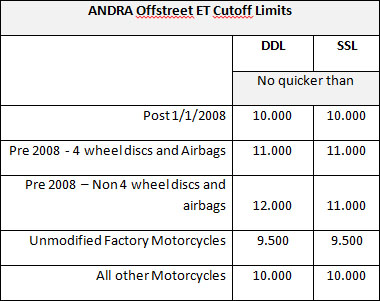