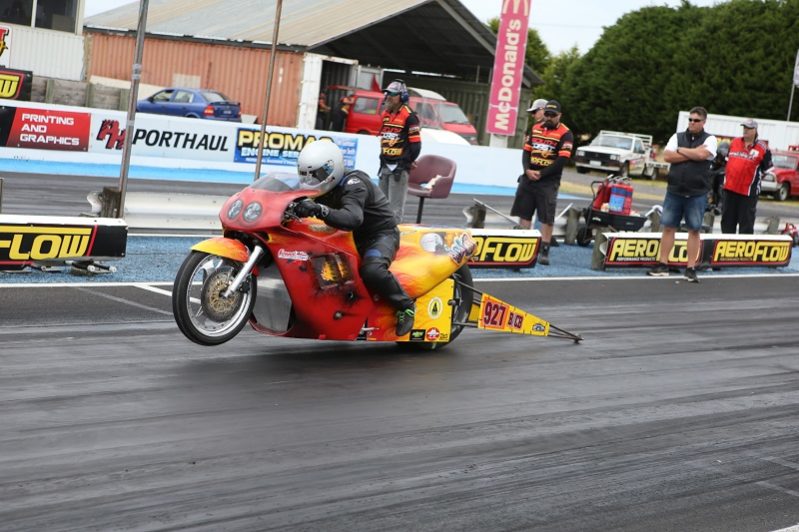 The September 22-23 event will mark round three of the 18/19 Summit Racing Equipment Sportsman Series and the first round of the Competition Bike championship battle for the season.

“It is really great to see the first Competition Bike field running at Mildura, I have been travelling up there a fair bit racing in Modified Bike and I think it is really good news for everyone, and especially the club, to have a Comp Bike field come together,” Frost said.

“The track is very good, the club is always trying to improve the facilities and if we can get away with low wind and no dust, it will be a great event.”

While Frost says he will of course be hoping to win in Mildura, he isn’t making it easy for himself.

“We are actually going to the event without our good motor – we haven’t been able to get it back together in time after destroying it at the Grand Final,” Frost explained.

“As well as running our Modified Bike motor, we are also running the Modified Bike frame as the Comp Bike frame is currently sitting bare on the bench in the workshop as we try out a few things – we won’t be bringing it back out until the start of 2019.

“While we won’t have our title-winning package at our disposal, with the new format coming in for Competition Bike we wanted to make sure that we were part of the field and so we had to make it work!”

The new format Frost mentions is the new ANDRA national championship racing format for the Competition Bike bracket which will debut at the Sunset Strip Nationals.

“It is so great to have an eight-bike field for the Sunset Strip Nationals – I think it just goes to show the new format is encouraging people to get involved and I really hope we will see more fields like this moving forward,” Frost said.

“With the new format, Competition Bike will be running the three-round ‘round robin’ eliminations style and the racers with the highest points will go to the final. You will really have to be on top of your game for all three runs to make sure you make the finals.”

While work commitments will keep Frost from competing at all rounds of the championship this season, the Warrnambool racer will be taking in as many events as he can.

“I am really looking forward to this year – if we can get a eight-bike field at Mildura I think it bodes well for the rest of the season,” Frost said.

“I have to thank my sponsors Ballistic Racing, Trevor Birrell and Forcewear Components for all of their support last year and for coming on board again this year.

“Unfortunately I am not going to be able to contest all of the rounds this year as my business is expanding and we are moving premises so time restrictions will be a problem for chasing the title this season. We will still be going to all of the events that we can though.”