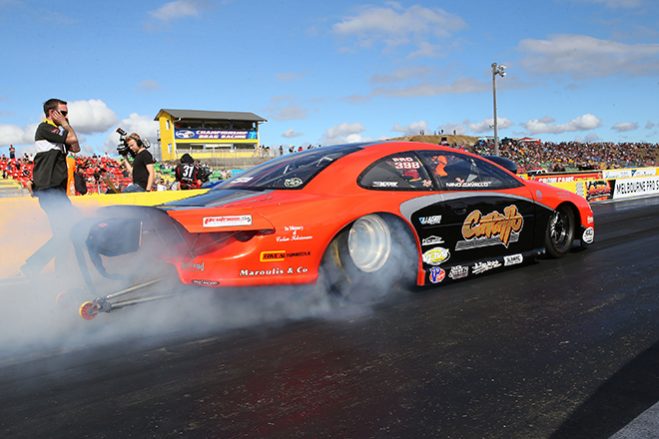 Although he would have liked to finish the job at the ANDRA Championship Grand Final earlier this month, a semi final in Sydney last November and the win at Calder Park Raceway in January were enough to guarantee his first Group One title.

“I’m very happy to win a Championship in Pro Stock, that’s something I thought we would not achieve to be honest with you,” said Cavallo.

“It’s the hardest class we have run in. Compared to Super Stock Championships it’s a lot harder, not saying Super Stock was a walk in the park.

“Having only two rounds made it a bit unrewarding, I would have liked to have raced a couple more rounds to make it a bit more deserving.

“But we did have a fast and reliable car that could match it with the other Pro Stock teams.”

Reliable, fast and quick have become standard operating procedure for Cavallo as has matching it “with other Pro Stock teams”.

He defeated Lee Bektash in the final of the Winternationals last season and achieved the win at the Australian Nationals defeating both Tyronne and Aaron Tremayne along the way.

“Winning the Nationals at our home track was something that we will never forget,” he added.

“We didn’t qualify as good as we would have liked but the end result was one of the best we have had, apart from last years Winternationals when we beat Lee Bektash in the final.

“To race and win in front of your home track is great, the support we had from spectators, fans and family made it truly worth the effort.

“This could of not have happened without the support from my family, Amanda, Laura and Dion, my crew Adam, Allan, Theo, also Jason from Race Radiators, VP Racing Fuel, Lancaster Homes, Phillip and Steven and VPW.”

ANDRA extends its congratulations to Nino Cavallo and his team on becoming the 2015/2016 ANDRA Drag Racing Series Pro Stock Champion.