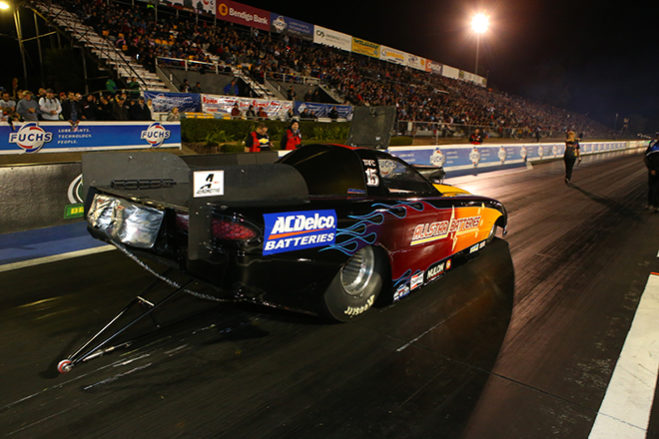 Steve Reed and the Allstar Batteries Top Alcohol Funny Car enjoyed centre stage in front of a near-capacity crowd at the largest drag racing event held outside of North America at the weekend, making it all the way to the finals at Willowbank Raceway’s Winternationals.…

Steve Reed and the Allstar Batteries Top Alcohol Funny Car enjoyed centre stage in front of a near-capacity crowd at the largest drag racing event held outside of North America at the weekend, making it all the way to the finals at Willowbank Raceway’s Winternationals.

While not taking out the gold ‘Christmas Tree’ trophy on the night, Reed gave it all he had and was in front during the tense final race, before a broken clutch component saw the car slow up – allowing winner Jamie Noonan to edge ahead before the finish line.

“We had a really good weekend – we had a consistent car, it might not have been the fastest in the place but it was consistent, and in the final we were leading until we had a clutch component break,” said Reed, who qualified second fastest for the event.

“We broke a lever off of the clutch which slowed the car down. When you look at the footage you can see that we are in front of Jamie (Noonan) and it looks like it would have continued that way, but then the component broke and slowed us – otherwise we would have been good for the win.

“The upside is that everything can be rebuilt and repaired, so it is onwards and upwards for us to the next race in July in Darwin to open up the brand new season.”

The result saw the Reed Racing team come away from the event with not only runner-up results at arguably the most prestigious event on the Australian drag racing calendar, but also with third in the national championship – despite only racing at two of the three events of the season.

“To come home third in the championship having only competed at two of the three events is a pretty good outcome, especially when you consider that the two people in front of us – 17 time national champion Gary Phillips and John Cannuli – competed at all three,” said Reed.

“We are happy with that result – hopefully we can build on that momentum in the new season.”

Reed Racing were joined on-track across the four days of the Winternationals by valued sponsors ACDelco Batteries and Nulon.

“It was fantastic having some of our sponsors on-track with us and we hope they enjoyed the show we put on for them and for the crowd,” said Reed.

“The amount of people at Willowbank Raceway across the event was just phenomenal – when you get to race in front of more than 35,000 people it is always a good thing, and we hope our sponsors and supporters enjoyed being centre stage with us in front of such a packed house.”

Supported by ACDelco Batteries, Nulon, Jack Bros – Specialised Automotive Machining, Aeromotive, Champion Spark Plugs, Mobile Flywheel Grinding, Ridgecrest Engineering and Reed Transport, Reed Racing is based in Brendale, Queensland and headed up by 1994 Top Alcohol champion Steve Reed. The team will next be on-track for round one of the 2015/2016 ANDRA Championship, in Darwin across July 17 and 18, 2015.

For more information on the team, visit www.allstarbatteries.com.au or please click here.