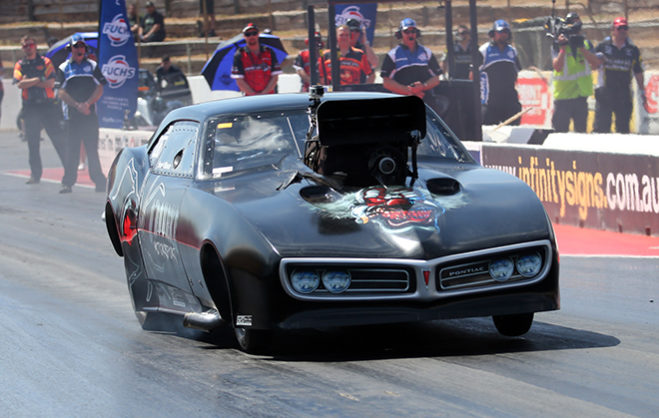 We have a brand new winner in the ANDRA Drag Racing Series. Grant O’Rourke broke through for his first ever event win at Adelaide International Raceway on Sunday, taking the Fuchs Spring Nationals Top Doorslammer victory over now seven-time champion John Zappia.…

We have a brand new winner in the ANDRA Drag Racing Series. Grant O’Rourke broke through for his first ever event win at Adelaide International Raceway on Sunday, taking the Fuchs Spring Nationals Top Doorslammer victory over now seven-time champion John Zappia.

O’Rourke and his wife Debbie – who together make up O’Rourke Motorsport – dedicated the win to MH17 child victims Mo, Evi and Otis, and their grandfather Nick – personal friends of the O’Rourke family who perished in the July tragedy.

“It is just amazing to get this win, we knew we had Mo, Evie and Otis looking down on us this weekend and it is our absolute honour to dedicate this victory to them,” said O’Rourke.

Thanks to the weekend’s results, O’Rourke has now all but secured third in the Championship in what is his first full season in Top Doorslammer in seven years. He needs only to appear in qualifying at the Australian Nationals in Sydney October 31-November 2 to eliminate his only mathematical threat for the position – Peter Kapiris.

“To take the victory is obviously very special on a personal level for us as a team, but it is also very important in terms of our championship by allowing us to pretty much lock down third in the standings,” said O’Rourke.

“To be third in the title chase and to have taken my first ever event win in my first full season back is a great achievement for our team and one we are very proud of.

“I have to thank Debbie for all of her hard work this weekend. As she wasn’t racing she put everything into my program this weekend.

“Also deserving of a special shout-out is ADRoads – they have supported us this weekend and helped us out with fuel and so forth to get our transporter all the way from Queensland to Adelaide and back,” said O’Rourke, who is also supported on-track by Crow Cam, Thermal Edge Coating and the QCS Group.

To take the event win, O’Rourke first qualified fifth, to face fellow Queenslander Gary Phillips in the first round. O’Rourke 5.306 second pass defeated a tyre smoking Phillips’ on a 12.748 second effort seeing him proceed to the semi-final.

There he faced off against another fellow Sunshine State racer in Stuart Bishop, with O’Rourke taking the victory with a 5.159 second result over the red-lighting Bishop who went on to complete a 5.156 second pass.

A tense finals race was then in motion, with West Australian ex-pat O’Rourke set to face the newly crowned seven-time back-to-back Top Doorslammer champion and West Aussie John Zappia in the final. O’Rourke put down a victorious clean pass of 5.26 second pass while Zappia launched hard left and brushing the wall on 6.44 second effort.

But take nothing away from Grant O’Rorurke who produced clean, consistent and quick results all weekend to finally stand on top of the mountain.

The team will now head back to Queensland in time to feature amongst the official on-track entertainment at the upcoming Gold Coast 600 (October 24-26) as part of a special drag racing demonstration.

Attention will then turn to the final round of the 2014 ANDRA Drag Racing Series Championship chase at the Australian Nationals at Sydney Dragway on October 31 to November 2.