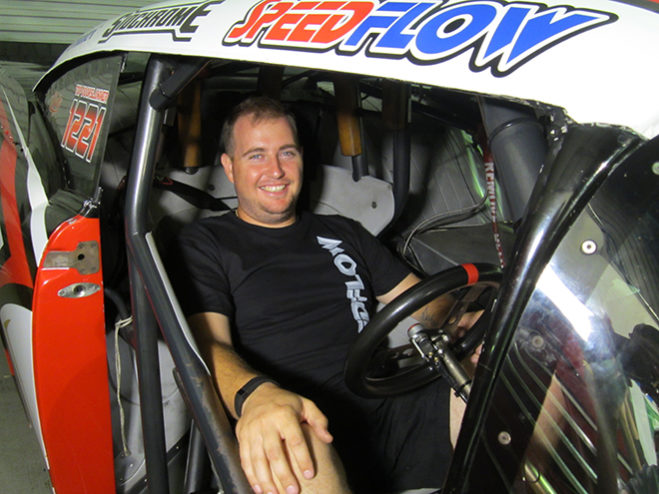 The Fuchs Winternationals (4-7 June) will host the comeback of three-time national champion Ben Bray, following a headline-making incident at the same event twelve months ago.…

The Fuchs Winternationals (4-7 June) will host the comeback of three-time national champion Ben Bray, following a headline-making incident at the same event twelve months ago.

On the Saturday of the 2014 Fuchs Winternationals Bray was undertaking double-duties in the Top Doorslammer and Factory Xtreme brackets, and made national headlines when his FX Nissan Altima race car rolled, hit the safety wall of Willowbank Raceway roof-first, and then came to stop on its roof during last year’s Fuchs Winternationals.

The impact left the 31 year old father of two with rib and back injuries, seeing him restrained in a full body brace for three months.

While the Kallangur resident was due to make his come-back at Willowbank’s Santo’s Super 3 Extreme Drag Race event presented by Uplift Cranes and Titan Cranes in April, that event was unfortunately cancelled due to the extreme weather experienced by South East Queensland that weekend.

That cancellation saw the team’s focus turn to Sydney’s Nitro Champs instead, but in an incredible turn of events that event too was cancelled due to poor weather conditions.

“It has been a little crazy being ready to make our comeback not once but twice and having those returns dashed at the last minute, but that hasn’t changed the fact that I am really excited to be getting back on the track,” said Bray, who just weeks ago married his long-time partner Samantha.

This year’s event will be the first time Bray has competed since the incident, with private testing set to be scheduled for the racer in preparation for his return to active competition. While the return is hotly anticipated, Bray is cautious about making any big calls as far as performance.

“The Fuchs Winternationals is the biggest event of the year for any drag racer in this country, or anywhere outside of North America for that matter, the track is always in great condition and big performances are pretty much guaranteed at that time of year especially,” said Bray.

“It is the site of my world record breaking passes in the Altima in 2013 (fastest and quickest ‘doored’ four cylinder car of the time), it is my home track, and while it is also where I had my incident, it will always be my home away from home.

“While I am so excited to be coming back and at such a great event at my home track, the ‘comeback’ will and always has been about taking baby steps – getting back in the car, getting the feel for it again, and getting back into the sport I love – I can’t wait!”

Bray will take to the track in his father Victor’s ’57 Chev Doorslammer, as his brand new car is still undergoing preparation work.

“We had planned to debut the brand new 1979 Corvette Stingray but it isn’t quite ready yet and the last thing we want to do is rush it through, so Dad has been kind enough to let me take the wheel of his car for the Fuchs Winternationals,” said Ben Bray.

“I have said it before, but I really want to thank everyone in the drag racing industry from the fans to my fellow racers and the officials for their support, and I look forward to seeing everyone out at Willowbank for the Winternationals.”