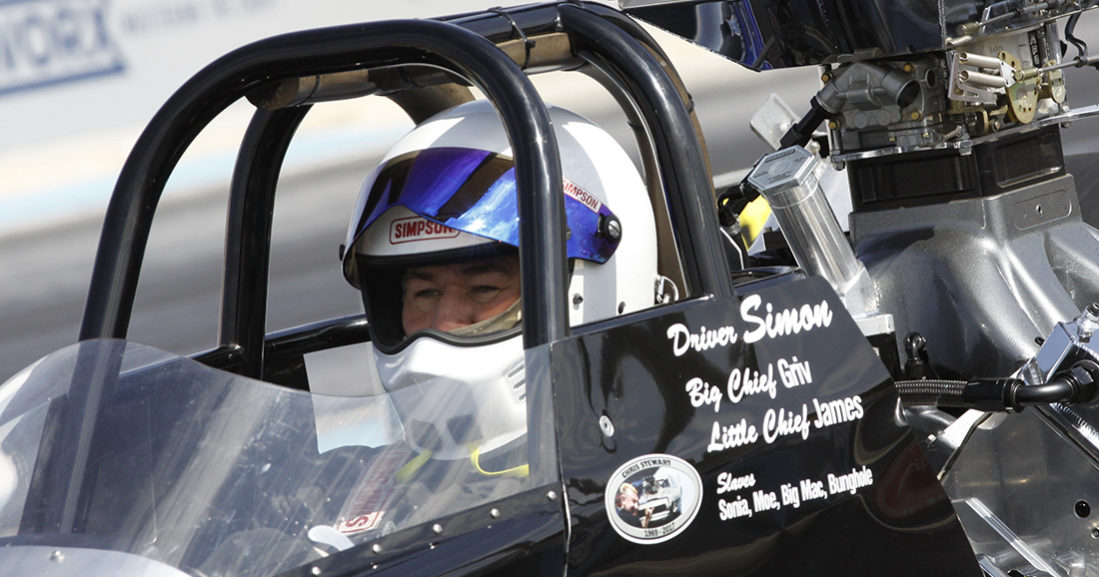 Simon Barlow might not have come away with a Modified win at the weekend’s Sunset Strip Nationals in Mildura, but he did break both ends of the Eighth Mile A/MD national record.  A 4.425 second/159.19 mile per hour effort during day two of what was round three of the Summit Racing Equipment S…

Simon Barlow might not have come away with a Modified win at the weekend’s Sunset Strip Nationals in Mildura, but he did break both ends of the Eighth Mile A/MD national record.

A 4.425 second/159.19 mile per hour effort during day two of what was round three of the Summit Racing Equipment Sportsman Series saw the 48-year-old truck driver from Adelaide rewrite the record books.

“Unfortunately, the weather on Saturday threw everyone a curve ball but the club and ANDRA made the right call in aborting racing for the day as it was too dangerous,” said Barlow, who competes with a rear-engined dragster with a Sunset Performance 632-cubic-inch naturally-aspirated Chev engine.

“On Sunday we had all intentions of going rounds but in round two, the car went into violent tyre shake during the run and we bowed out to the event winner Wade Kisyma. Our congratulations go to him on his win.

“When it came to the record, it wasn’t something I was really chasing, but often records are a result of trying to keep up with the rest of the competition! Modified right now is one of the toughest fields to race in and every season more people step up with faster and more consistent cars

“As a racer chasing a championship, our aim is to win every round possible which is hard enough in Modified, and to make sure we don’t throw wins away by going red or sleeping on the tree. Every round win means points in the bank heading to the finals. While every red light makes for a long trip home with a crew who never forget to remind me that the driver is the weakest link of the car!

When it came to the record run on the weekend, I was actually surprised to get the record as the run actually felt slow – it must have been the great track that the club prepped so well.

“Whilst it is not our main aim (to get more records), I am confident the car will go quicker. The engine has only done about eight meetings and we still need to find the right settings for the car/engine combo. When it behaves its good, when it doesn’t it’s a hand full.

“In the meantime, I just want to thank the Sunraysia Drag Racing Association for all of their efforts under trying circumstances at the weekend’s meeting – to Kinglsey, Lauren, Dean and all of the volunteers, well done!”

While he might not have made it to the winner’s circle at the weekend, Barlow has been no stranger to victory over his long involvement in drag racing.

“I have been racing since ‘cars were invented’,” laughed Barlow, who thanks Phil and Mick from Reads Transport, Lawrence and Hanson Gawler, Just Muscle Cars, MV Automatics, Wades Automotive Refinishing, his crew and his partner Sonia for their support.

“I spent two years in Super Street before moving to Modified where I have been now for almost 20 years.

“I took my first Christmas tree in 2008 which was certainly a highlight – it took me another seven years to get my next one, but since then I have been lucky enough to collect a few more.”

Round four of the Summit Racing Equipment Sportsman Series, the Spring Nationals, will be held at Adelaide International Raceway on Saturday October 14. For more information, visit www.andra.com.au and http://adelaidedragracepromotions.com.au/