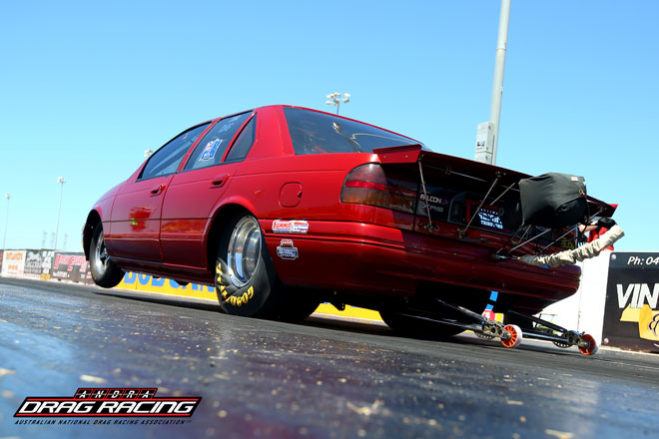 It’s a given that when you win something, you want to have another crack at it. Be it a scratch and win ticket, poker machine or winning a championship.…

It’s a given that when you win something, you want to have another crack at it. Be it a scratch and win ticket, poker machine or winning a championship.

In the case of current ANDRA Super Stock Champion Kim Fardella, he’s decided to have another go this season.

“Winning the ANDRA Super Stock Championship was an awesome experience for us and while it was something we didn’t expect, it was decided we can’t stop now. We want to have another go at the championship and hopfully make it two in a row”, said Fardella.

“I’m supported by a good mate and his wife – Terry and Jackie Watt. I’ve known Terry from back in school, and to be honest I couldn’t do it without their help. In fact I wouldn’t bother if it didn’t include them. If they don’t go, I don’t race. It’s as simple as that.

“The year we won the championship we travelled around a lot and it turned out pretty good. This season we started out with a win in Darwin, but after that we’ve struggled a bit.”

Fardella was hoping to catch up on points at his two local Summit Racing Equipment Sportsman Series rounds at Perth Motorplex, however during qualifying on day two of the Goldenstates, a front tyre appeared to have picked up some debris resulting in a puncture.  Losing air fast between the burnout and start line, Fardella found himself in trouble as his ED Ford Falcon steered into the wall on the launch.

“It all happened pretty quickly”, said Fardella. But I was lucky because further down the track at high speed, it could have been a lot worse. As it was the car broke a front shock and suffered some cosmetic panel damage.

“We’ll be back for the Westernationals and looking for a more rewarding event this time around. Jamie (Chaisty) is on 300 and Tom Dimitropoulos is second on 245. I’m currently sitting equal third alongside Graeme Simms on 210 points.

What ever the outcome is at the Westernationals, Fardella is adamant that he and his crew are still going to the Summit Racing Equipment Drag Racing Grand Finals March 31-April 1 at Adelaide International Raceway.

“I’m in this for the fun. I mean when you dump the clutch at near 9000 rpm with a 5 speed gearbox how is that not fun. That’s what we like, plus the travelling around and meeting so many great people.

“I’d also like to thank my sponsors and supporters – Jackie Watt Consultancy, Huntsman Racing,  Mandurah Caravan and Tourist Park (WA), Manjimup Freight Distributors, Safe Site Traffic Solutions, Mat Vandersluys from Valley Engines and Components/ET Clutches, Manjimup Freight Distributors. Also my crew –  Nicole Chaisty, Reg Cocking and Willow Bass and to many others who support us in many ways. Thank you all”, said Fardella.