American Darian Guillory Down Under for the second time

American Darian Guillory Down Under for the second time 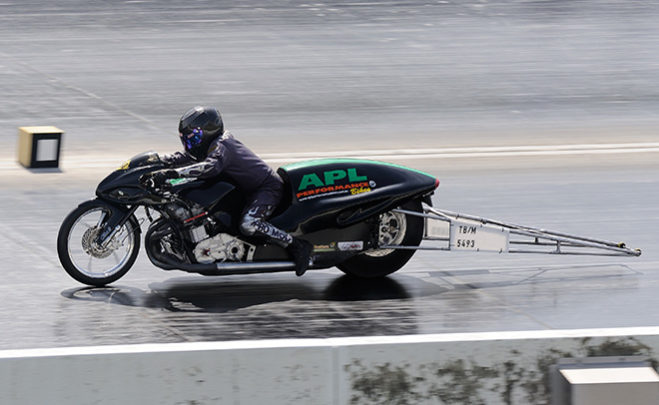 American Darian Guillory will return to Australia for the second time to ride the Rod Barchet owned 1640cc Suzuki Timblin in Top Fuel Motorcycle at the Fuchs Winternationals June 4-7.…

American Darian Guillory will return to Australia for the second time to ride the Rod Barchet owned 1640cc Suzuki Timblin in Top Fuel Motorcycle at the Fuchs Winternationals June 4-7.

Guillory, who made his Australian racing debut at the Australian Nationals last November, will visit Willowbank Raceway for the first time at the biggest drag racing event outside of the United States.

“Rod has told me the Winternationals is the largest drag racing event outside of the USA, I can’t wait to be a part of it and will truly cherish the experience,” said Guillory.

“I love it in Australia.  It has always been one of the places highest on my list of places to see in my life.

“I am very excited to race at the Winternationals. The track in Sydney was a true pleasure to race, the staff at the track were second to none. The racing surface was great, with plenty of traction.”

There he approached Guillory asking questions about Pro Mod Bike, the bracket he was racing at the time, with an interest in bringing one to Australia.

The exchange was pleasant, helpful and friendly but it wasn’t until over 18 months later that Barchet followed up with a phone call to see if Guillory was still interested.

“Being as passionate as he is about his racing and also his genuine desire to help anyone else who wants to have a go he took up the challenge,” says Barchet.

“While I took care of the finances he took care of consolidating everything I needed to build an engine and bike at his place in Edwardsville, St Louis.”

Barchet boarded a plane a couple of months later and spent a week building the entire bike from scratch. They then loaded up in a U-Haul rental trailer and travelled 1000 miles to Florida to test the bike out at a Manufacturers Cup round.

“We had some early teething problems with the bike and after an exhausting and frustrating weekend we came back to his place where I made the decision to put it away over the Winter break and return to run the bike in the spring.”

“At that point, even though seriously burning the midnight oil for a week, often working until 3am and sometimes later to help build the bike, going to work at his day job, then driving the 2000 mile round trip to Bradenton Raceway in Florida, run the bike, try to resolve the issues we had with it and return in time to start back at his day job the following week, I was amazed with how much stamina and determination Darian has when it comes to racing.”

To date Guillory has refused any sort of payment for turning Barchet’s dream into reality and instead agreed Barchet would fly Guillory to Australia to race the bike they built together at an ANDRA Championship event.

That event was the Nationals at Sydney Dragway last year where Guillory put on a demonstration of his riding skills managing to top qualify and runner up at the meeting, only to be defeated by pushing out a head gasket in the semi final and burning the cylinder head in the process.

“Since then there has been some mechanical and tuning issues which have now been addressed but unfortunately not leaving enough time for me to get licenced and have some seat time on the bike to feel competent to race at this event,” Barchet explains.

“So while talking to my newly found sponsor Niki Zakrzewski, proprietor of Auction World and naming sponsor on the bike, she suggested we fly Darian over to ride the bike again at the Winters which I thought was a great idea so a phone call later and the ball was in motion.

“We have a great bike and team and the Pro Mod format which is very exciting and extremely strong in America and the Middle East due to its affordability for it’s level of performance, it is relatively new to Australia.

“Even though the bike is still unproven here and we are competing against some of the best teams in the country we are excited to be running the Auction World Suzuki at the Winternationals.

After posting a 7.05 second pass at 191 mph despite struggling with electrical problems at the Nationals in Sydney, the team and Guillory are looking forward to putting some more power in the bike and showing Australian spectators and competitors what their bike can do.

“The thing I would have to say I look forward to the most outside of the racing when I get there is spending time with friends I have made just because of the love of motorcycles,” adds Guillory.

“When they have the nitro bikes running like they should, any one of them can win at any time.  We have a job to do and we have to be the best we can at that. If we do that and get beat then whoever beats us did a better job.”