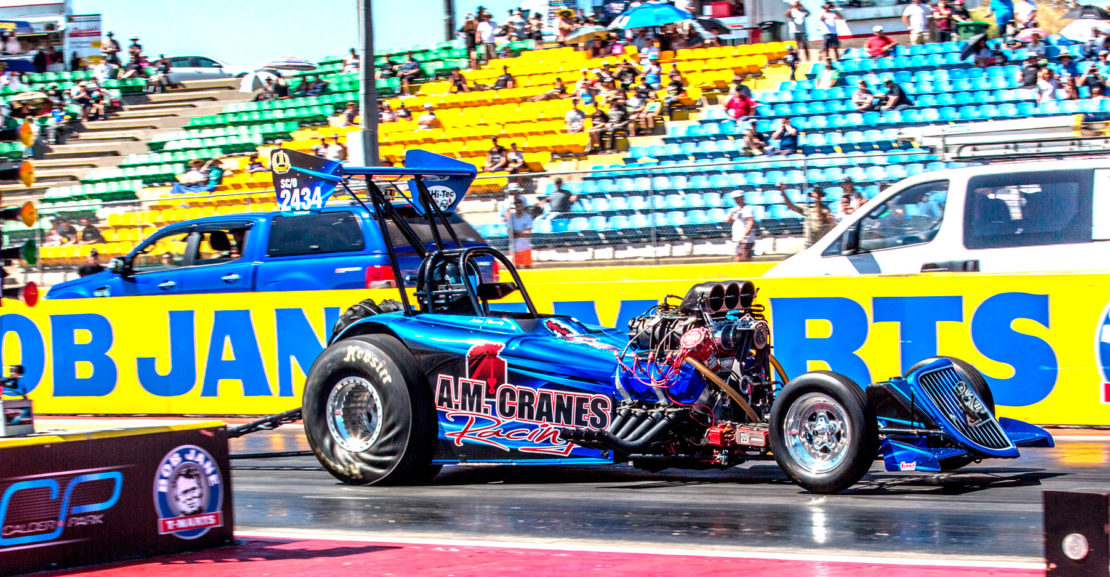 It’s been a busy week leading up to the 2017 Nitro Up North event for current ANDRA Supercharged Outlaw champ Adam Murrihy.

A pre-event display at the Hidden Valley Tavern, setting up signage at the track and now some engine TLC for the race car, yes you read it right, rebuilding an engine the week prior to the biggest drag racing event in the Northern Territory

“We do things casually up here,” laughed Murrihy. Nah we haven’t got too much to do. Shannon (Gaddes) flew in and will be on board to give us a hand so it won’t take much time to get the engine ready.

“The plan is to contest both Nitro Up North and Desert Nationals. We’ll see how they pan out before anything else, but yes the plan is to defend our No.1 and try and become the first racer to win three Supercharged Outlaw championships.

Murrihy has a bit of a plan and is hoping to head over to Perth for a few rounds this season.

“We went over there last season and crewed for Damien Muscat for the Top Fuel Motorcycle rounds. It’s a nice venue so we wouldn’t mind going over and having a run there,” said Murrihy.

“It’s a plan at this stage because the gap between the two rounds is wider than previously. So that might change things, but we’ll see how we go over the next few weekends.

“I have only run the past two years at the Desert Nationals. Last year we bombed out in the semis and the year before that wasn’t very kind to us at all. We put seven windows in the block that year, so that was costly,” said Murrihy.

Having done well over the past few years at Nitro Up North, Murrihy is hoping the trend continues and he can go one-step further in Alice Springs.

“Alice has been challenging for us. In Darwin, we were running 70-weight oil in the engine and the car loved it up there with the hot temperatures.

“But when we got to Alice, the temperature dropped to minus 4 at night, and everything changed.

“We went to start it up in the morning and blew the oil filter clean off the engine. I got another of a racer who wasn’t racing that weekend and it did the same thing again. And then we windowed the block!

“Yes we had some dramas but thanks to Hi-Tec Oils we have since gone back to a 50 weight oil and now pre-heat the oil these days in Alice so it flows a bit better,” grinned Murrihy.

“I’m really looking forward to this year especially with the roll up of interstate racers and the convoys all coming up for a good time. Outlaws is one of those classes where we aren’t running for sheep stations. Everyone helps each other out and we all get along. It’s a real social event.

Murrihy has his fingers and toes crossed and hoping his good luck continues, especially in front of his family, friends and home crowd.

“It’s an awesome facility here especially with the support from the government. The clubs are really blessed to have such a great track,” said Murrihy. “And when all the interstate racers come up they love it. They bring families and have a two-week holiday mixed with some racing and sightseeing. Doesn’t get any better.”

Asked about the competition Murrihy said, “We have some good runners in Outlaws this year. Dave Thornton out of Mildura is coming, as is Shane Kramer from South Australia who has a quick little Altered and of course my old mate Justin Russell in his Camaro.

“I’m sure Justin will be up at the pointy end of the field. Believe it or not but I’m sponsoring him to get here so that could be tricky if we meet in the final, laughed Murrihy.

“He was on a tight budget so I helped him to come up. We are good mates and it’s always good fun when we race against each other, but I guess I’ve just set the bar a little higher for myself now!”