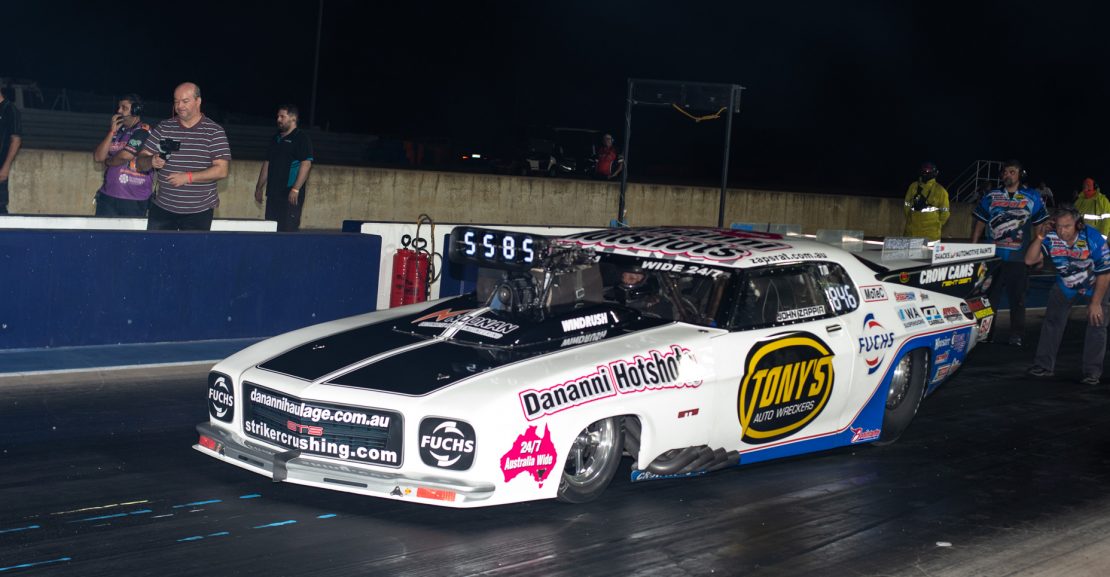 Seven Top Doorslammers have travelled from all over the country to the Northern Territory to compete in the new series, with Zappia moving into a strong position to claim the Crow Cams Top Qualifier Award, presented by Decoglaze Glass Splashbacks, and the accompanying $1000 cheque in the process.

Zappia will need to hold the lead for one more qualifying session on Saturday before the Top Doorslammer field enters eliminations. The driver of the Dananni Hotshots/Tony’s Auto Wreckers Monaro was outrageously consistent during Friday night, with three runs clocking 5.78 second times.

“We were trying different things and it was coming up with a 5.78 every time,” a surprised Zappia said. “The first run was on rails and that was our quickest pass, a 5.781. It looked really safe so we put more clutch into it off the line for the second run and we were a bit quicker early in the pass but it got out of the groove a little and I had to short shift, so we lost some speed.”

The third session proved a wild one for Zappia, as he went deep into the braking area after a 408km/h (254mph) top speed.

“We changed our B&J gearbox ratios before the last run, but the track got way better and we didn’t have enough,” he said. “It rattled the tyres and got out of the groove again, but this time at the top end it kept going left. I had a quarter of a turn on the steering wheel trying to keep it off the wall, and I didn’t get the parachutes early enough. It was hopping and bouncing in the braking area and I ended up only just in the gravel!”

Fortunately there was no damage to the car and Zappia, who won the last ANDRA Top Doorslammer championship in 2017, was free to prepare for day two of the Top End Nationals.

“We will do our regular maintenance and make sure everything is as good as it can be so we can start the new Australian Drag Racing Championship off strongly,” he said.

Zappia will have his hand full with the competition on Saturday, with three other drivers descending into the five-second zone during qualifying. Fellow Western Australian Daniel Gregorini currently sits second with a 5.830, but has the bragging rights on speed so far with a 411.86km/h (255.92mph) blast.

Kelvin Lyle (WA) is just behind with a 5.883, though he tore up a parachute in the second qualifying session when he narrowly avoided hitting the safety barriers.

Local driver Matt Abel will be hoping to keep the ANDRA Gold Christmas Tree trophy in the Northern Territory, with his fourth place 5.916 right in contention. Andrew Sutton (NT, 6.142), Rob Taylor (Vic, 10.204) and class rookie Bronte Henning (NT, 24.441) fill out the rest of the field.

The final Australian Drag Racing Championship qualifying session takes place tomorrow at 6.30pm, with the first round of eliminations at 8.15pm and finals at 9.55pm.

Also on track at the Top End Nationals this evening was qualifying for the opening round of the 2021/2022 Summit Racing Equipment Sportsman Series – click here for a wrap-up of today’s SRESS action.