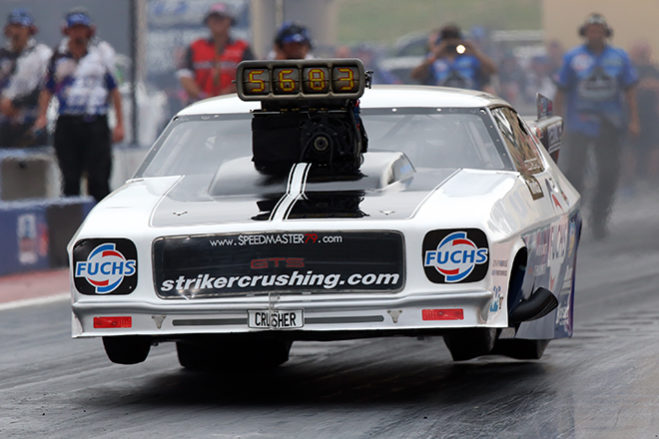 The event is round four of the Top Doorslammer ANDRA Drag Racing Series Championship and the first time the Nationals has been run at Calder in 15 years.

“Calder Park has strong memories for us at Zappia Racing.” said Zap.

“We travelled to Calder back in the early 1990’s because the crowds were huge and Doorslammer racing was new to this country. It’s great to be going back to race the full quarter mile with an upgraded track.”

In 1995 one of the most memorable Top Doorslammer races of all time – in front of 55,000 people, John Zappia took out the final from Brendan McSweeney by “mowing the grass” at Calder in the original Zap’s Rat.

“That was a memorable race, and it got a lot of attention over the years. We were running mid six second passes back then with some pretty rough chassis cars – compared to todays standard. The Fuchs HQ Monaro is a state of the art chassis and has all the latest go-fast bits in it.

“The horsepower has increased dramatically as well – even over the last year or so, with Noonan Engineering manufacturing their own hemi heads that are bolt on power. We have not only found more power, but through testing many different combinations have found a level of reliability that allows 10,500rpm regular racing with few problems.

“We are looking to set a few more records this weekend. No Top Doorslammer team has run a five second pass at Calder yet, and the track record is up for grabs as well. Getting all the new power to the ground is the challenge for all race team tuners.”

“We are aiming to improve all aspects of our racing this meeting. With me taking a break over the Christmas period my mind is fresh and focusing on a few key areas, and am keen to do well.

John Zappia leads the 2015/2016 Top Doorslammer ANDRA Drag Racing Series on 311 points after winning Rounds 2 and 3. His closest and most dangerous opponents are Grant O’Rourke on 213 points and Mark Belleri on 202 points – both teams are at the pointy end of the field running five-eights consistently.

“It’s hard to predict who will win this round, with six of the eight having won Top Doorslammer rounds before, and will probably come down to who can read the track and weather the best and adjust their tune accordingly.”

“We welcome new Major Sponsor Dananni Hotshots to the team, and hope their HOTSHOT freight business gets exposure across Australia from their investment in our team and the sport of drag racing.”

Zappia racing fans are welcome in the pit area to watch over the crew and the Fuchs Monaro, and get their merchandise personally signed by Zap.

The Australian Nationals will be live streamed to viewers via the ANDRA web site www.andra.com.au

Tickets and info at www.calderparkdragracing.com.au