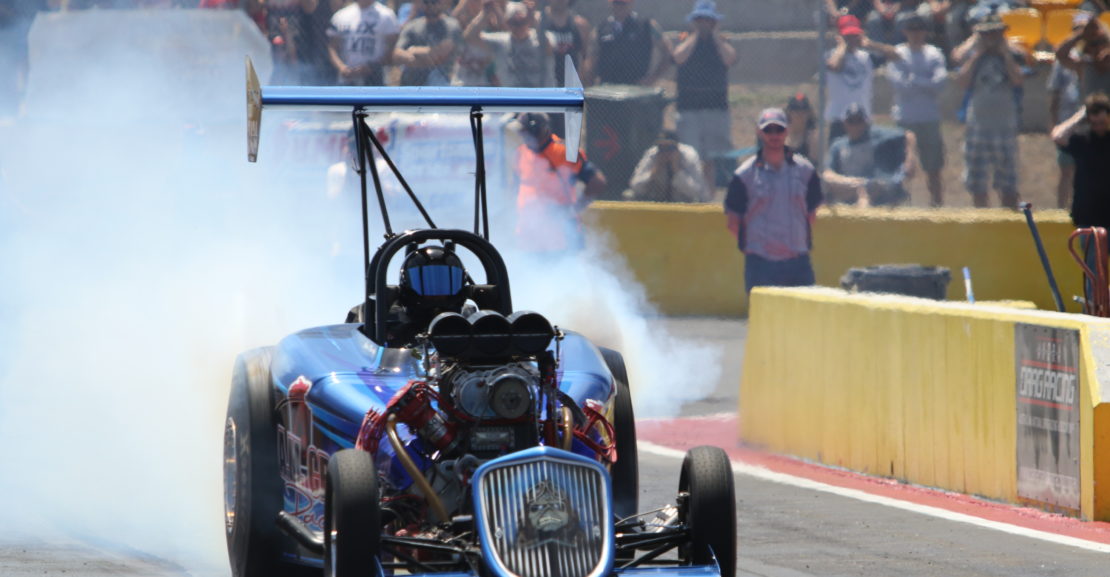 Top Sportsman had a solid field with 19 entries. Darren Saliba nailed the number one spot in his GTO with a 7.21 ET, ahead of Darren Nichele’s 7.44 ET.

Super Comp saw Super Stock and Comp combined with the DD/GA Firebird of Daniel Camilleri take the number one spot with a 0.55 under 6.277 ET. In second place was Jamie Chaisty from WA with a 0.53 under 7.782 from his H/MSA Commodore. Super Comp had 12 drivers go under their index, with 8 sub-record runners in the 16-car field and two non-qualifiers!

Junior Dragster had 28 entries with South Aussie Andrew Shirley grabbing the Top Qualifying spot with an 8.003.

In Supercharged Outlaws Northern Territory racer Adam Murrihy (pictured) took the pole with a 5.547 in his ’32 Bantam, ahead of Ryan Van Dyk’s 5.69 ET in his dragster.

Simon Barlow was the quickest in Modified Eliminator with a 7.09 from his SA based dragster. Ladies Leanne Braggs and Jess Turner are placed second and third in the 18 car field.

Top Qualifier in Super Sedan was Scott Cohen from Tasmania

In Super Street Brett McDonald was on top with a 10.13 in his GTS while in Super Sedan it was Tassie’s Scott Cohen’s Fairmont taking the pole with an 8.62 ahead of 38 other drivers.

Super Gas had a field of 12 for the 9.90 index bracket. In the number one position was Victorian Adrian McGrotty clocking a 9.903 in his Commodore. Matt Forbes Lucas Oil Corvette was second with a 9.905.

Modified bike was the only two-wheel category at the Nationals. Rob Cassar’s AA/MB Kawasaki had the quickest ride of the 14-bike DYO field with a 7.65 ET. Reigning champ Bryan Finn rounded out the field on his Honda.