State of Origin on Two Wheels in NT

State of Origin on Two Wheels in NT 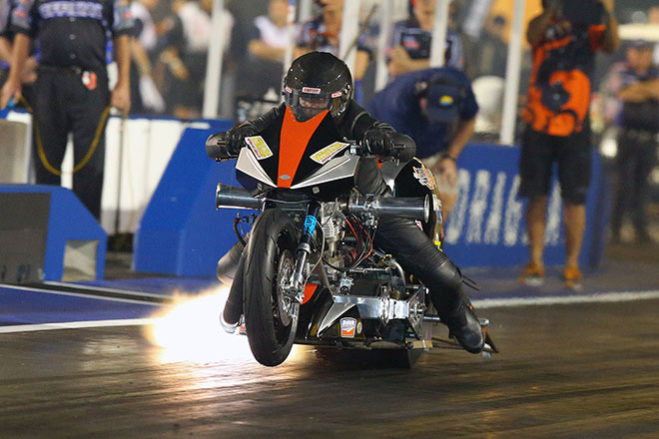 While Queensland may have already come out on top in the current State of Origin Rugby League Series, for Top Fuel Motorcycle racers Chris Porter and Damian Muscat the battle will continue this weekend on two wheels as part of Hidden Valley Raceway’s Nitro Up North event (July 8 and 9, 2016).…

While Queensland may have already come out on top in the current State of Origin Rugby League Series, for Top Fuel Motorcycle racers Chris Porter and Damian Muscat the battle will continue this weekend on two wheels as part of Hidden Valley Raceway’s Nitro Up North event (July 8 and 9, 2016).

For 37 year old Mackay Managing Director Muscat, his thoughts on the State of Origin battle are simple.

As far as fifty one year old Porter of Kemps Creek in New South Wales, the reigning champion is looking forward to taking on all comers regardless of state.

“It has always been a bit like this (state against state) in the category, but more like a tri-state of origin with all the West Aussies,” said Porter, who races a 186 cube Nitro Harley and is supported on-track by his family, crew, Frasers Harley Davidson, Interfreight Transport and Duncan Foster Engineering.

“With Chris Matheson in the past I am used to going up against the Queenslanders. With Muscat in the show now it just means I have another Queenslander to beat! Bring it on!” he laughed. 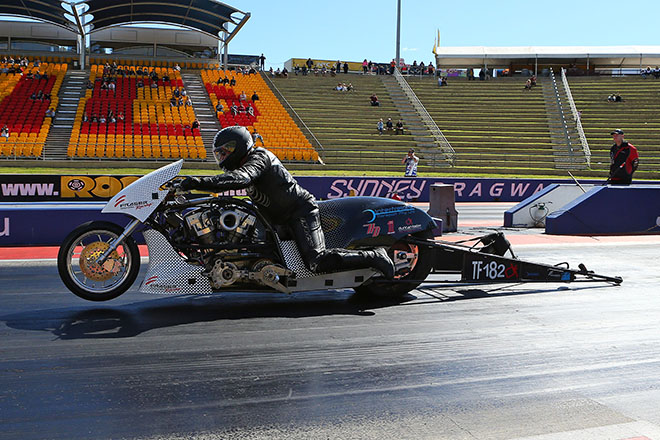 Muscat has been piloting his Nitro Phoenix Harley Davidson for less than a year, and with only 17 passes completed since he purchased it from Canada’s Damian Cownden in late 2015, has already tasted success.

“Between the last two owners the bike is one of the most decorated bikes winning something like 13 championships across Canada and the USA, so when it came time to purchase a bike late last year, it was the best bike on the market,” said Muscat, who is supported on track by Crane Logistics, Mine Spec Parts, Fuchs, Mackay Harley Davidson, Sammut Harvester and Hydraulics, Nitro Lube, T and G Insurance, BB Print and MCS Automotive Engineering.

“I can’t wait to get up to Darwin, I have heard it is a great place with a great bunch of people, and it can’t get any better for Top Fuel Motorcycle with five of the six bikes being nitro Harleys with their great thundering sound.

“We want to concentrate on getting down the track and getting some data and more experience. Hopefully I can get put on a good show for the fans and also for my crew and my family – special thanks must go to them, especially my wife and also Damian Cownden for supporting me in this ride of a lifetime and for all of their support.”

While avenging the defeat of the Blues in the latest ball-based State of Origin face-off, Porter also has the championship on his mind.

“It was good to get the number one back after some tough competition from Matheson and Mark Drew, and keeping that on the bike is always on all of our minds,” said Porter.

“I am certainly looking forward to heading to Darwin – I was runner-up there last year and this year we will be going for the win and some personal bests, while looking to start our title defence.”