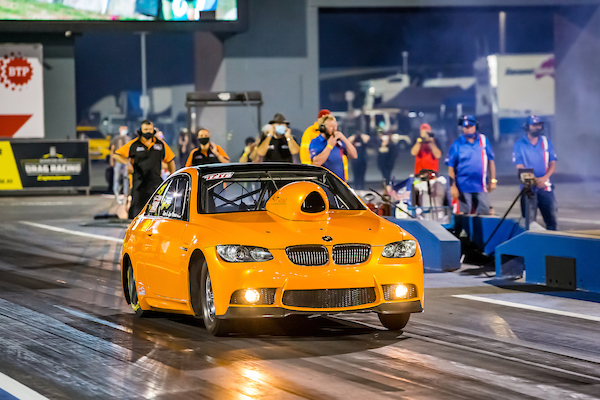 The 51st annual MacTrack Westernationals hosted more than 180 racers over its two days, with the Summit Racing Equipment Sportsman Series racers putting on a host of stellar performances in the pursuit of coveted ANDRA Gold Christmas Trees.

Also taking to the track today were the Australian Drag Racing Championship’s Top Doorslammer and Top Fuel Motorcycle brackets – for the wrap-up of their racing, please click here.

In Super Street, Richard Stevens had a solo pass in the final after taking earlier victories over Josh North (round one), reigning national champion Paul Garbellini, Norm Campbell and Beau Higgins. Sterkenburg meanwhile had taken on Lisa Garbellini, Andy Oorschot, Kirstie Wroe and Chris de Bruin, but was unable to front for the final after suffering engine damage. Decoglaze Glass Splashbacks Top Qualifier John Szabo was defeated in the second round by Cameron Lockett, who faced Beau Higgins in round three.

“We are pretty ecstatic about winning it! The last time I won, I had a completely different set up in my car, we just threw something together to race this season and it has gone really well so far. John from Long Roof Speed Shack really went above and beyond to get it all back together for me,” Stevens said.

“We had some good races today and some good competition against my opponents, especially Paul Garbellini. It is a shame that Glenn blew his motor up – my condolences to Glenn on missing out.

“Overall, it was a really good day put on by ANDRA and the Perth Motorplex and everyone involved, they all go above and beyond, so thank you to all of them and especially Ray Treasure. I also want to say thank you to John at Long Roof Speed Shack, Rocky from LSX Performance, Eddie from Active Automatics, Simon from Allfast Torque Converters, and of course my crew, Kevin, Chelsea, Caitlyn and Connor, and to my fellow racing team mates.”

In Modified Bike, Paul Nieuwhof snagged a lucky break when his opponent Luke Seaton broke-out after Nieuwhof had all but conceded the race with a breakage off the start line. Not realising Nieuwhof had struck trouble, Seaton pushed his bike all the way to the end of the track, breaking out in the process. Nieuwhof – who was also the Top Qualifier for the bracket – went to the final against Luke Seaton after emerging victorious from battles against Wayne Gummow (round one) and Michael Macri before a round three bye, before defeating Brian Hotker in the semi-final. Seaton booked his place in the final with wins over Chris Morgan, Wayne Patterson and Ian Read before a bye in the semi-final.

“We all know who the real winner is – poor Luke! How lucky was that for me, it is absolutely crazy,” Nieuwhof said.

“The bike has been running great all weekend and had good lights but in the last two runs, in the semi I had a half hour reaction time it seemed like but Brian broke a gearbox, and then in the final off the startline something went bang in the gearbox and the bike had no drive. So, there I was watching Luke sail off thinking that was that, and his handicap was on the board and I thought ‘bugger me dead’ – I was just gobsmacked.

“You take the luck where you can get it, but I do feel sorry for Luke – he ran a great race and he deserved better. But that is the way it goes and I had to pinch myself – it has been a long time. I have had a good run at the Westernats in the past, over time I have won eight or nine, including three times in a row at Ravenswood, but it has been a long time between drinks.

“Thank you to FME, my wife Julie, my crew, and all the great people around the track. Who would have thought I would win the biggest event of the year with an 18 second pass,” he laughed.

In the Summit Racing Equipment Junior Dragster class, it was another case of unfortunate events, with Beau Ferguson encountering issues on the startline only for Lucas Green to break-out and hand the victory to Ferguson, who had claimed the Top Qualifier honours earlier in the day. On the way to the final, Ferguson had enjoyed a bye run in the opening round ahead of wins over Brock Moresby and Tahlia Martin before another bye in the semi-final. Green meanwhile had taken on and defeated Jett Martin and Brock Ferguson before a round three bye and a win over Dylan Spadaro in the semis.

In Super Sedan, it was a dead heat in the final between Nick Panagopoulos and Roger Moorhouse, with Nick ultimately taking out the win when Roger broke-out. Panagopoulos took out the ANDRA Christmas Tree after earlier round wins over Craig Carter (round one) and Steve Hunt before a round three bye and victory over Top Qualifier Luke Guppy in the semi-final. Moorhouse meanwhile had taken on Tyron Begg, Eli Tunstall and Daniel Kojic before enjoying a bye in his semi-final.

“We have had a pretty tough weekend; we had a lot of issues going on with the vehicle and we were just trying to get through each round and work with what we had. We got through to the final and put together what we considered to be a pretty good package and managed to take the win which was unbelievable really.

“We had to work really hard for this result. We had some pretty significant issues we had to deal with, so to keep getting it through was good and then to really pull it together in the final was the icing on the cake – we PBed the car and put such a really tight package together, I reckon you couldn’t have asked for a better package for a Westernats final, that is for sure.

“I was privileged to be able to drive for Con Adamos and the Adamos Family Racing Team for the Westerns, I was honoured to be given the opportunity and it was great to get such a fantastic result. Also thank you to the crew, and particularly to my son Andrew for stepping up and coming back to help for a while – we have been out of racing for about 12 months and it has been great to get back in the seat and get such a great result as well.”

In Top Sportsman, Alby Bakranich took out the victory over Top Qualifier Colin Davis. Bakranich had earlier taken wins over Paul Downe (round one) and Kevin McIvor while Davis enjoyed a bye run in the opener ahead of a win over Phil Rowles.

The Competition Bike final came down to Top Qualifier Phill Paton and Ross Smith, with a red light from Paton handing the victory to Smith. The bracket is run as a three-round format, with Paton and Smith securing three victories each to claim their places in the final.

Steve Norman took the Super Stock victory over Jake Chaisty, with the South Aussie racer taking the win following earlier wins over Graeme Simms (round one) and Daniel Johnston, while Chaisty had triumphed over Top Qualifier Errol Quartermaine before taking a bye run in the semi-final.

In the Competition Eliminator ranks, it was Sam Treasure who took a popular victory after a highly successful weekend. Treasure defeated Nigel Johnson in the final after earlier victories over Jayde Robinson (round one), Madison Brown and Connor McClure (who had beaten Top Qualifier Jeff Lewis in round two) while Nigel had defeated Michael Buckley, Paul Carey and Steve Martin on his way to the final.

There were plenty of smiles in the Treasure camp, with Darryl Treasure racing to the Modified victory over Nick Gardiner following earlier wins over Rachel Gannaway, Joel Mearns and Nicholas Wroe – who had taken out Top Qualifier Paul Ryan in the first round. Nick had secured his place in the final by successfully facing off against Andrew Frost and Kasey McClure before a bye in the semi-final.

The next round of the Summit Racing Equipment Sportsman Series will be held at Mildura’s Sunset Strip across March 18-19. For event information, visit www.sunsetstrip.org.au