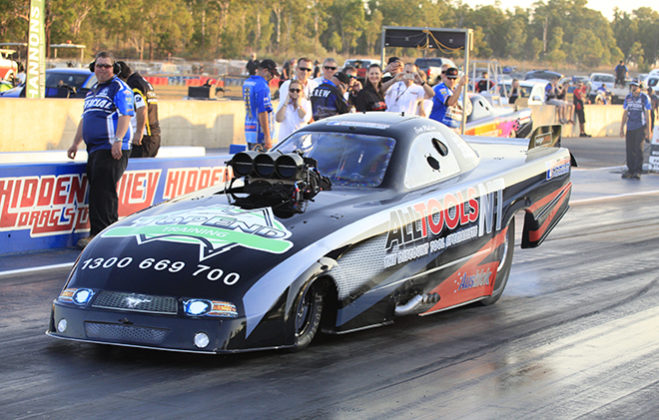 Hidden Valley Drag Racing Association President and Top Alcohol Funny Car driver Scott MacLean says Darwin is Drag Racing mad and he is a driving force behind the push to take the sport to new heights in the Top End.…

Hidden Valley Drag Racing Association President and Top Alcohol Funny Car driver Scott MacLean says Darwin is Drag Racing mad and he is a driving force behind the push to take the sport to new heights in the Top End.

For the third year in a row the ANDRA Drag Racing Series will visit Hidden Valley Drag Strip July 17-18 when Top Alcohol and Top Doorslammer kick off the 2015/2016 ANDRA Championship season with the two Rapisarda Autosport International Top Fuel Dragsters in tow to ignite the crowd during exhibition passes.

As HVDRA President, MacLean is making the most of the event with his team of volunteers aiming to make ‘Nitro Up North’ one of the best drag racing events Darwin has ever seen.

“To be honest it’s quite nerve racking just to be able to see the first event to be organised and completed let alone the second when Top Doorslammer return for Round 2 on August 14-15,” he said. “However the feeling amongst our club and township is very positive.

“Darwin at the best of times has always been drag racing mad and these type of events are gaining more and more interest as a whole. The NT Government has been incredible with the support it has shown this great sport within the whole of the Northern Territory.

“The support it has shown both Alice Springs and Darwin has been very much appreciated from all levels. Just the words ‘Top Fuel’ have put Darwin into a frenzy – it will be the most anticipated event in Darwin in my opinion.

“What a way to celebrate 30 years of Drag Racing history for everybody that has been involved.”

The efforts behind the scenes are all geared to securing top level Drag Racing long into the future and showing the Government their investment was worth every penny by attracting even larger ANDRA Championship events.

“That’s the plan, Darwin loves motorsport as a whole, however we as a capital city would love nothing more than to host an A grade round of Drag Racing every year. To be able to bring major ANDRA Drag Racing Series and Summit Racing Equipment Sportsman Series events here on an annual basis would be fantastic.”

While stepping into the hot seat as club President, MacLean has maintained his position behind the wheel of his All Tools NT Top Alcohol Funny Car taking on six other drivers next weekend with a new Top Doorslammer Monaro on the way to complete the set.

“We are grateful that we now have a confirmed field of seven Top Alcohol cars. What will be fabulous is that all cars nominated are highly competitive and should be a great spectacle.

“Our new Doorslammer should arrive sometime in the next month or so, we are looking to compete in both categories for the ANDRA Drag Racing Series. We are about 80 per cent complete of refurbishing our transporter.”