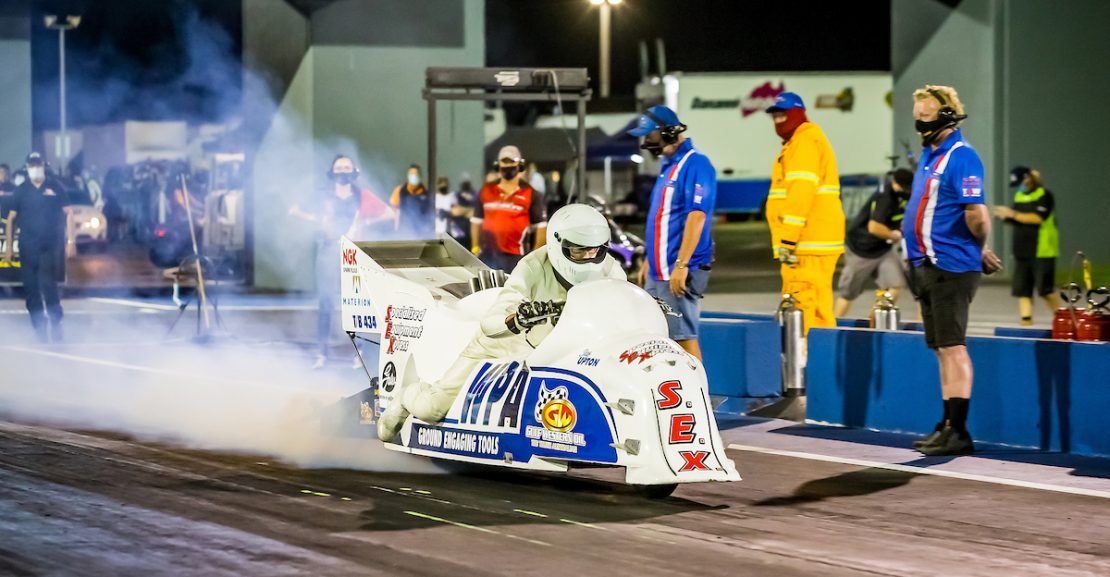 A talent-filled field of more than 180 competitors took to the track at the Perth Motorplex Saturday evening for day one of the 51st MacTrack Westernationals, with the Australian Drag Racing Championship (ADRC) playing a starring role in the proceedings.

At the close of Saturday’s on-track action, Daniel Gregorini claimed the Crow Cams Top Qualifier Award presented by Decoglaze Glass Splashbacks and the accompanying $1000 cheque for the Top Doorslammer category, while Jay Upton finished the night on top of the time sheets for the Top Fuel Motorcycle class with one more round of qualifying to run for that ADRC class.

“Our qualifying day started well. We had done a lap in testing earlier in the week and got the car going straight again, and it went fast, so we were happy on Saturday that we were able to pick up where we left off the other night,” Gregorini said.

“In testing we ran a 5.71, and in round one of qualifying Saturday we went 5.74 – it was cool to get that straight out of the truck on a warmish track. We kept plodding along with that and ran a 5.71 in the second qualifier, and then left it alone for the third one as it was getting a bit skatey out there. We were sitting back watching what everyone else was doing to make sure they didn’t knock us off, and when it was our turn, we got to half-track and it got loose, so I buttoned it off to save the car for racing.

“We are pretty happy about the result, to have about a tenth and a half over the rest of the field is pretty great.

“We will do our regular maintenance and make sure we have the same car going into eliminations that we have had in qualifying. We will be trying to secure the fast ET and fast MPH too to wrack up as many points as we can ahead of the ANDRA Grand Finals.

“I would like to thank all of my crew, and also Lisa’s crew who are here getting more experience by working on the car Saturday and Sunday, and thank you to the Perth Motorplex, to ANDRA and the ADRC.

“We have had a challenging day – we didn’t make the first lap as we had a fuel pressure issue; it wasn’t right in the pits and it probably would have run but discretion is the better part of valour and we thought it was best to fix it,” Upton explained.

“Then in the second qualifier we got caught out by our own safety system. We have a system that won’t let the bike start with low oil pressure, and due to the other issue, we were having it ended up shutting off. It was frustrating but saved us a motor and a lot of work. We could see in the data that that was what had happened, so we got that sorted.

“The main change has been that we put a new pair of mags on. It is about 10 grand for a pair of new mags but as you can see it makes a difference. We have been fighting the thing for quite some time and now we are in a good position with a good starting point to work from going into tomorrow.

“I would hope that we can stay around this level in the first round of racing, and then pick it up thereafter. We aren’t looking to set the world on fire, we are looking to get to the other end and hopefully that should be enough.

“I want to send a special thank you to my crew – it has been a tough day and they were all at the shop late Friday night as well, and when things aren’t going well it is hard on everyone.

“I would also like to recognise our sponsors: Rare Parts Western Australia, Gates Belt and Hose, and Gulf Western Oils for their support.

“Of course, I also want to say a big thank you to the track staff, the officials and volunteers, who put in so much work to make it all happen.

“Finally, a special shout out to the public for being patient with us. I feel bad when we frustrate them because we aren’t going well, and I appreciate their patience and their support. It used to be that every time we went out, we were going fast, and I think we can get back there.”

Also in action at the Perth Motorplex this weekend is the Summit Racing Equipment Sportsman Series. During Saturday qualifying, the Competition, Super Stock and Supercharged Outlaws brackets completed their qualifying, with Jeff Lewis, Errol Quartermaine and Vince Belladonna taking out the Decoglaze Glass Splashbacks Top Qualifier Medallions respectively for these classes.

Joining the ADRC and SRESS on-track today to the delight of race fans was the BME/Speedtorque Nitro Slam Series, with Andrew Katavatis topping both sessions in his Beach Bomb Nitro Funny Car.

The MacTrack Westernationals action at the Perth Motorplex will continue tomorrow (Sunday March 6) with the final round of qualifying from 1.00pm ahead of the start of eliminations racing from 2.20pm. The finals are expected to be held at approximately 9.00pm (all times local). For event information including entry lists and full schedules, please go to www.motorplex.com.au