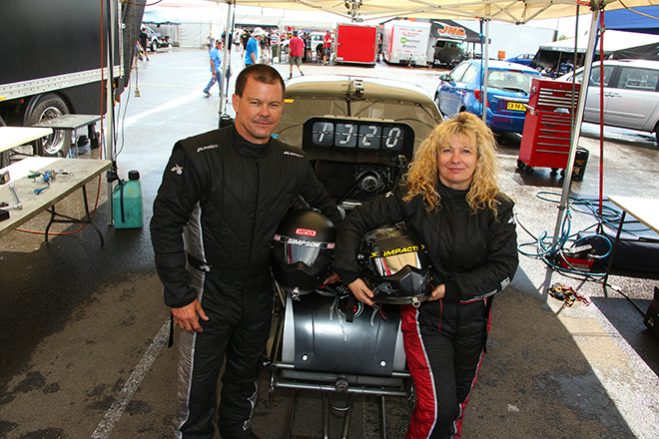 Husband and wife drag racing team Grant and Debbie O’Rourke have rounded out their 2014 Australian National Drag Racing season in third and sixth position in the Top Doorslammer and Top Alcohol championships respectively this weekend.…

Husband and wife drag racing team Grant and Debbie O’Rourke have rounded out their 2014 Australian National Drag Racing season in third and sixth position in the Top Doorslammer and Top Alcohol championships respectively this weekend.

In varying conditions of 37 degree sunshine to pelting rain and thunderstorms, the Top Alcohol and Top Doorslammer fields struggled for set-up and track time at Sydney Dragway’s Australian Nationals, with one of the three scheduled qualifiers cut from the schedule.

By the time qualifying day was done, Grant found himself sixth fastest on the Top Doorslammer sheets while Debbie unfortunately found herself outside of the Top Alcohol field after crossing the centre line in her first effort and being unable to post a time inside the top eight from the 12 strong field in the second session.

With Debbie out of contention for the weekend, all attentions turned to Grant’s campaign for O’Rourke Motorsport on a cooler yet still sunny Sunday which delivered difficult to judge conditions for all teams.

While a misjudgment saw a lack of power hinder Grant’s performance in the first eliminator against Marty Dack to see him eliminated early, the team is happy with a top three and top five performance in this year’s ANDRA championship.

“To secure the top three and the top sixth spots in the ANDRA Top Doorslammer and Top Alcohol championship titles is something we are proud of, especially in light of an up and down season for us,” said Grant O’Rourke.

“I thought in the first eliminator that I might have made it through despite the lack of power, with both Marty Dack and I spinning the tyres before the 60 foot mark, but Dack was able to recover earlier to take the win.

“Now it is all about refocusing and planning the next year ahead – you can rest assured we will be firing at the 2015 season with all cylinders.”

The Top Doorslammer championship was won by John Zappia, while the Australian Nationals event win went to Geoff Gradden. For Top Alcohol, Steve Ham took the title victory and was also victorious on Sunday.

“The team would like to congratulate both John Zappia and Steve Ham for their championship victories this weekend, and we can’t wait to keep fighting it out with them next year,” said Debbie O’Rourke.