Kingsley Kuchel may be best known in drag racing circles as the president of the Sunraysia Drag Racing Association, but he also has a new passion project which he hopes will help drive further connection between the members of the sport he loves and its fans.

Through his new hobby business Kuchel Koncepts Design Studio, Kuchel has introduced a modern take on the traditional racer card, and also overhauled all of SDRA’s branding with a fresh new look.

“Race fans need something that can help grow their connection to a particular race team, just like many fans do in wrestling and other sports,” Kuchel said.

“I am not trying to reinvent the wheel, but instead trying to bring the wheel into modern times. By using new programs, I have been able to create a Racer Hand Out Card that when paired with a free app and a smart phone, can turn a plain racer card into a virtual photo album complete with music.

“The photo album runs on a loop and so when the supporter goes home and puts their card on the wall, they can show their friends the sequences of shots and therefore grow a greater connection between the race team and the race supporter.

“I think now more than ever it is so important for our sport to recreate its identity and make it as appealing as possible to drag racing fans, and extend that experience outside of the track.

“With these cards, you can take the kids to a race meeting and give them something to be excited about and show their friends and their family. By driving this connection, you can help to grow their excitement and their interest in following and watching their favoured race teams, and then have a better chance of them coming back.”

The racer cards utilise the Eyejack program which, with the help of the free Eyejack app, a QR code and a smartphone, helps bring the handout cards to life. Each racer card comes complete with a set of instructions on how to unlock the functionality of the cards.

Recent visitors to Mildura’s Sunset Strip, the home of SDRA, will have also seen further evidence of Kuchel’s work on display. 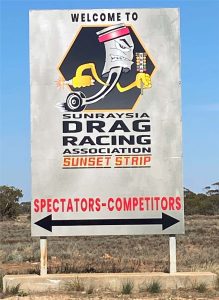 “As part of my Graphic Design course, I chose to design a new logo for Sunraysia Drag Racing Association. After extensive research I found that all drag racing logos in Australia generally fall under three design elements: the name of the club/track; a silhouette of a race car; or a name with a Christmas tree,” Kuchel explained.

“Obviously there where small variations, but all in all they all fell within these areas so I felt the key for the SDRA logo redesign was to create something which was very different and unique that I could then grow to have its own identity.

“As was the motivation behind the Racer Hand Out Cards, I wanted those that attended the Sunset Strip to be able to feel a connection with our Club. So, with that in mind I produced a logo that I feel is like no other in Australia.

“The new logo consists of a cartoon style piston, which we have named Holeshot Harry. Over the next few years, I have plans to grow the image of Holeshot Harry and the Sunset Strip, but to start it off I have had all new major signage for the track produced using the new logo.

“I then also had something different produced which I have not seen at any of the drag strips I have been to in Australia, and I have been to most of them except those in Queensland. I have created a photo board with Holeshot Harry with cut-outs so kids both young and young-at-heart can take photos, which they can then share and tag on social media.

“We also have plans to introduce new team merchandise and startline shirts in the coming months which I have designed, and I am excited to see the new look unfolding all around the track.

“I am not looking to set the world on fire or re-create the wheel, but I am hoping to share some of the love and passion I have for this sport with others that feel the same.” 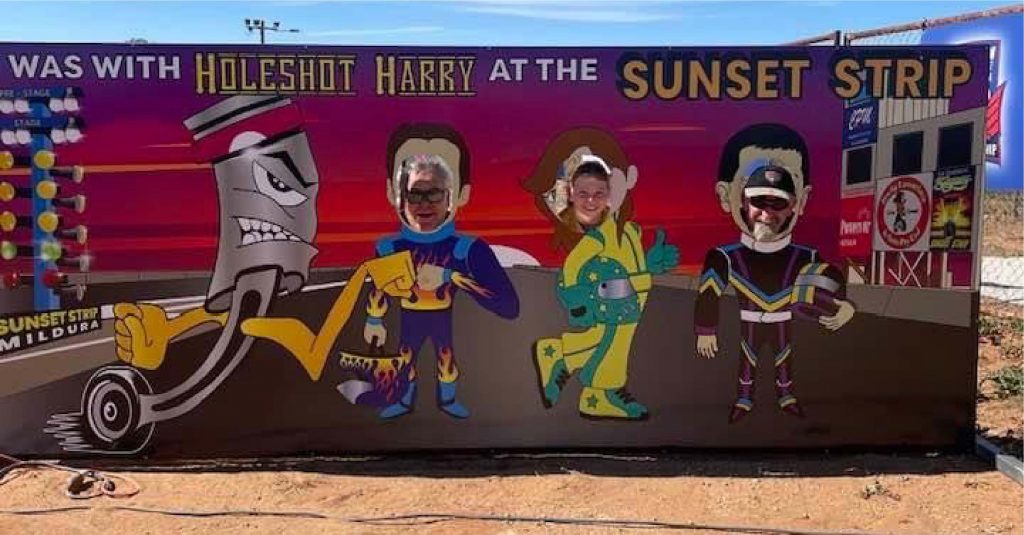 Racers interested in getting their own hand out cards should contact Kuchel on the details below with a range of high-quality photos covering not only their on-track exploits, but also other aspects of their racing such as images of them in the pits, working on their vehicles in their sheds and team photos. Sponsor logos can be incorporated into the design either on the image reel or on the back of the card, and a brief text introduction can also be included. A5 size cards on thick card stock cost $150 for the first 100 cards and then $50 for every additional 100 ordered.

Kuchel can also assist racers with design applications including for logos, signage and merchandise. For more information, contact Kuchel on sweetsensationracing@hotmail.com or visit https://www.facebook.com/KuchelKonceptsDS