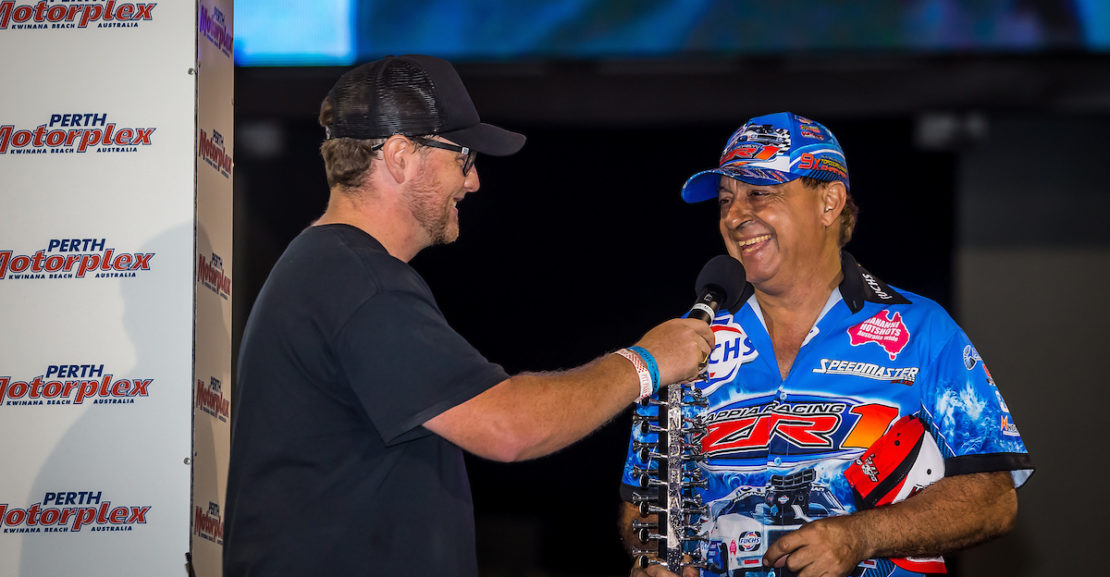 After the epic final Top Doorslammer qualifier on Friday, today was all about going rounds. And rounds it was for the current ANDRA Champ John Zappia, fighting off some strong performances from the other teams. For Top Fuel motorcycle it was a whole new day with their three-round format. And a n…

After the epic final Top Doorslammer qualifier on Friday, today was all about going rounds. And rounds it was for the current ANDRA Champ John Zappia, fighting off some strong performances from the other teams.

For Top Fuel motorcycle it was a whole new day with their three-round format. And a new day brings new surprises with the two quickest bikes bowing out and giving Benny Stevens a popular win.

Yesterday’s qualifying sessions was a nail biter for nine-time ANDRA Top Doorslammer champ, John Zappia. After popping a supercharger in the opening session, the crew had to miss the second qualifier repairing the damage in the pits. At this point Zap was looking in from the outside. In the final qualifier Zappia was under pressure but delivered with a 5.70 for No.1 and a big speed attack of 410 kph!

For the first round Mark Belleri took on Daniel Gregorini with both drivers drilling the tree with 0.00 lights but shortly after the Scratch & Match Camaro struck trouble while the AC Delco Monaro took the win in 5.91 seconds. Grant O’Rourke then faced Sydney racer Sam Fenech. The App Shop Camaro was out first but got loose shortly after leaving the Firebird to take the win with a 6.20 ET.

Rd 1 action continued with Steve Aldridge and Scott Mclean. On the green the Maclean Holden was out first and took the win with a 5.92 while the 55 Chev recorded a new PB in 6.11 seconds. Closing the round John Zappia dropped a 6.01 to an up in smoke Pino Priolo.

In the semi finals Belleri took on points leader Zappia. On the green the AC Delco had a slight holeshot but Belleri’s 5.94 was no match to a 5.74 from the Fuchs Monaro. On the other pairing Maclean dropped a 0.000 reaction on O’Rourke. Shortly after the Firebird saw a pop and a flash of flame, and the Maclean Holden takes the win with a strong 5.787 ET.

The final paired the two quickest ‘Slammers together which is how it should be. On the green Maclean was out first on a holeshot but headed towards the centerline and had a peddle to bring his race car under control. This put Zap out front with the Fuchs Monaro taking the win in 5.71 seconds at 408.46 kph to a 5.918/399 from the Maclean Holden.

“The Fuchs Monaro finally came through in the end”, said John Zappia. We had a few nervous moments over the weekend but we came through when it mattered. The crew worked hard and it’s great to get another win in front of my home crowd.” 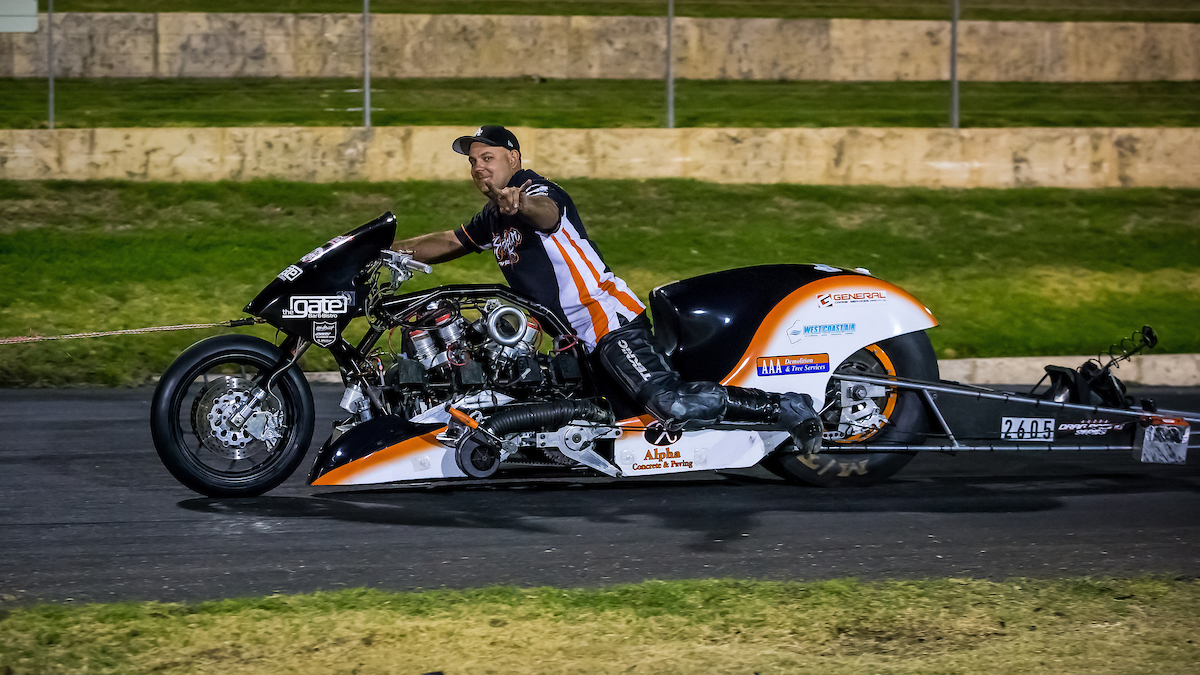 After winning the A Final yesterday, Damian Muscat looked unstoppable with his strong mid-six second performance on his nitro Harley. Well today it was a different story, when in the round that mattered, he wasn’t able to fire up his bike and had to watch the smaller cube Harley of Les Holden take the win.

Mark Drew had a solo and runs a solid 6.72. Benny Stevens defeated Wayne McGinness with a 6.91 ET, and Greg Durack’s 7.097 was too strong against Tony Wood, especially with a 327 kph PB speed.

The B Final paired Durack and Holden together. The turbo’d Kawasaki was away first, and while Durack was moving around a bit, he hung on to take the win with a 7.6 ET.

Mark Drew was favourite to take out the A Final, however just past the 60-foot timers the back tyre went up in smoke handing Benny Stevens a very popular win in 7.10 seconds.

“While we would have loved to gone a little quicker in the final, I think we broke the 200 mph barrier”, said Stevens. “I’m stoked to have done that. It’s a great day and we are very excited with this win. After we celebrate tonight we’ll take the bike home, freshen it up and get ready for the Western Nats in a few weeks time and hopefully do it all over again.”