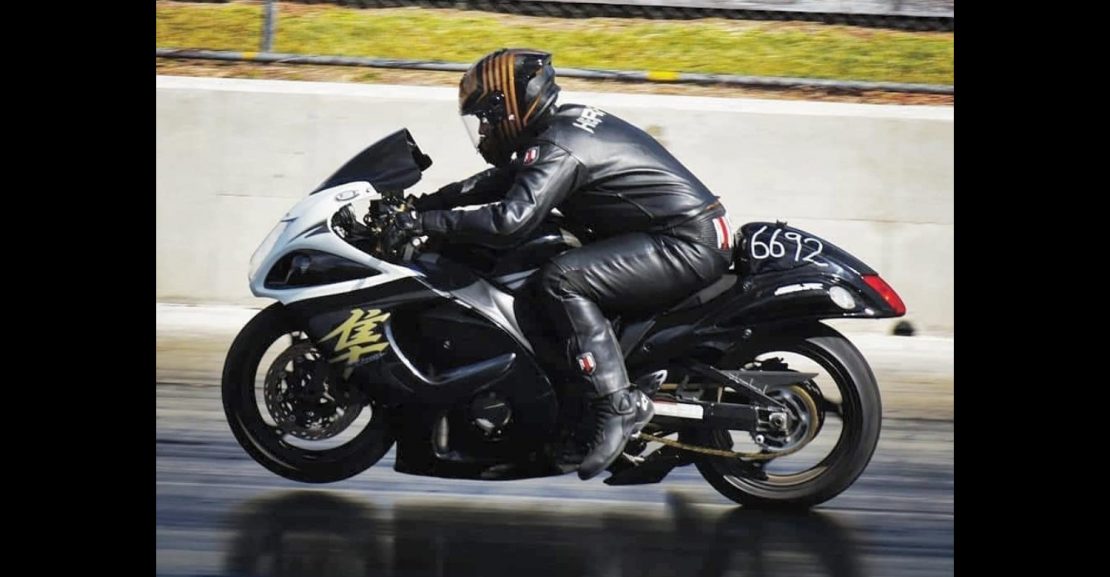 Jake Herriman has overcome an obstacle-filled 2021 season in the Central Queensland Drag Racing Association’s Club Championship to not only take out the Modified Bike title but also the club’s Overall Champion gong.

Being forced to chop and change his ride of choice throughout the season was not enough to stop Herriman from racing to multiple event victories to edge out last year’s overall champion, Brett Kelly, for the big prize.

“We started the year with a front-end upgrade on my drag bike as we had some issues stopping last year, so that saw me having to take my road bike – a Suzuki Hayabusa which we lowered – to the first round – where we won,” Herriman explained.

“By the second round I had my drag bike fixed up and ready to roll, so we took it back out and it behaved itself so we could secure another event win.

“In round three we had some other issues arise with the drag bike, so I had to bring out the street bike again, bringing home the runner-up honours in the process.

“Round four saw me back on the drag bike, but during that event I broke the small taper off my crankshaft which meant we had to pull the motor out and so the drag bike was sidelined for the rest of the season.

“My lowered street-going Hayabusa was what I raced for the rest of the season, and while we had a few ups and downs and a few hiccups with getting the power down, we managed to pull it off by just one point to take out the Overall Club Champion title as well as the Modified Bike title.

“I didn’t think I was going to be able to do it, so it was a very welcome surprise when I saw that I was that one point ahead!

“Overall, it was a really hard year – there is no easy race in Modified Bike and absolutely no easy race against all the car guys in the overall standings. Absolutely everyone is always on their number and there are no easy races.

“I am just as surprised as anyone that I got the Overall Championship win, I am so used to seeing the car guys take out the number one spot, Brett Kelly and all the other car guys are so dialled in.

“I am so used to seeing Brett in the finals and taking out the wins, so for me to finish ahead of someone who I view as better than me is absolutely mind-blowing – I am absolutely chuffed!” he grinned.

After such a hard-fought season, Herriman – who also took out the CQDRA 2019 Modified Bike title – has a number of people he would like to acknowledge for the roles they have played in his success.

“Full Bore Motorcycles and Dyno Tuning has always been there. I am prone to quite long burnouts and usually wreck a tyre in a meeting, and Full Ball are always there with tyres, even when I pick up the phone at the last minute,” he said.

“Mark from Full Ball is also involved with tuning and dynoing my bikes and I will not let anyone else touch my bike other than me or my dad. He has made it into such a weapon that is so easy to ride and that has shown through the results.

“I also want to thank my mum and my dad – especially my dad and his business All Bikes Performance. He has built and helped me maintain the bikes and is always there to help me out, he is always there, whether I am at the track or not and it really means a lot.

“Also this year, we had the loss of a very dear friend of ours and I want to dedicate these championships to him.

“Paul Bushell of Industrio had a really big impact on me. I have known him since I was born and have always seen him as an engineering master. He was a driving force to my drag bike who was always behind me and an awesome man, I was very sad to see him go and so I want to dedicate these titles to him.”

To learn more about the CQDRA championship, please visit www.benarabydragway.com