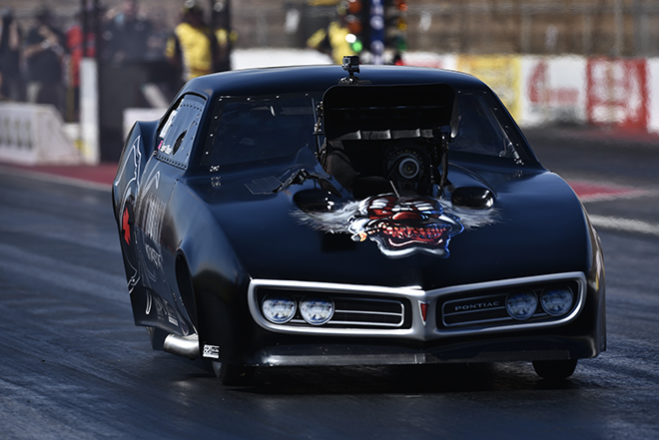 Grant O’Rourke will be flying solo for the husband and wife drag racing team O’Rourke Motorsport at the Nitro Champs at Sydney Dragway (May 2-3), with Debbie O’Rourke sidelined due to damage sustained to her Top Alcohol Funny Car at last month’s Pro Series 1000.…

Grant O’Rourke will be flying solo for the husband and wife drag racing team O’Rourke Motorsport at the Nitro Champs at Sydney Dragway (May 2-3), with Debbie O’Rourke sidelined due to damage sustained to her Top Alcohol Funny Car at last month’s Pro Series 1000.

The fairest of the pairing qualified 4th in a competitive racing field at the April Adelaide event, however suffered damage to the cylinder heads during the first round of eliminations – seeing her not only out of that event, but also the Nitro Champs.

Usually repairing such damage would be well within the grasp of a team such as OMS, the ongoing effects of the robbery endured by the team in Perth earlier this year, has compromised their ability to come back from set-backs such as this.

“It is really unfortunate to be sitting on the sidelines at the Nitro Champs, but with no spare parts left after the burglary of our transporter in Perth earlier this year, we just don’t have the means to have everything repaired properly in time for this weekend,” said Debbie O’Rourke, who is currently fourth on the Top Alcohol points ladder with two rounds left to run.

“We were hoping for a top three result in the Top Alcohol title for this season as there are only two points between me and the third-placed racer currently, but having to drop this round will make that difficult.

“At this stage it is our plan to have my car repaired in time for the Winter Warm-Up (May 30-31) for some testing ahead of the season-ending FUCHS Winternationals (June 4-7) at our home-track of Willowbank Raceway.”

With Debbie sidelined, all attention for the Nitro Champs will be on husband Grant, who with just two rounds of racing left to run in the shortened 2015 Top Doorslammer season is hoping for a top five championship spot.

“We are currently fifth in the points for the Top Doorslammer championship, and while John Zappia is well out in front, all positions from 2nd to 7th on the ladder are still wide open for the taking with just 89 points covering those spots,” said Grant O’Rourke.

“We will be doing everything we can to make sure we can claim not only a top five result, but maybe even a runner-up result in this shortened season ahead, that is for sure

“It is a real shame to have Debbie sitting on the sidelines for this round – unfortunately the reality of the burglary is that we are well behind the eight ball as a small team. While I wish the reports that we have recovered some of our lost items were true, the reality is that we are yet to recover anything from the burglary and instead are left trying to do the best we can to come back to what was a very significant blow to our team and our valued supporters. We won’t give up though!”

The Nitro Champs will hit Sydney Dragway across Saturday 2 May and Sunday 3 May. For more information about O’Rourke Motorsport, go to www.orourkemotorsport.com.au