From Perth to Darwin to Alice Springs

From Perth to Darwin to Alice Springs 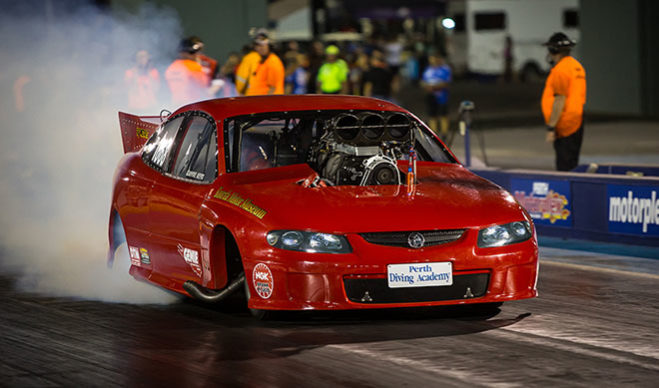 Not only was it an opportunity for him to join the likes of John Zappia, Stuart Bishop, Grant O’Rourke, and Peter Kapiris in the first ever ANDRA Championship round of Top Doorslammer at Hidden Valley, it was a chance to take a round trip from Perth to Darwin to Alice Springs where he will compete at the Desert Nationals a week later.

The former Competition Eliminator National Champion owns the record for the quickest pass and fastest speed for his vehicle class (AA/AP) so he is no slouch, but he has high expectations of the big boys come Friday night.

“I reckon the Darwin fans are amongst the most passionate I have seen and they have already had a small taste of Doorslammer action but when these guys come to town they play for keeps,” he said.

“There are Championship points as well as elapsed time and speed points up for grabs and I can tell you all the heavy hitters are going to be chasing those. These fans are definitely in for some wild door handle to door handle on track action, qualifying is going to be huge.”

Fellow Western Australian John Zappia comes into the event with wins at the X-Champs in Sydney, the Fuchs Winternationals at Willowbank Raceway and a 106 point lead over nearest rival Stuart Bishop. But it could yet be a local who takes the honours this weekend according to Keys.

“Zap has proven time after time that when the chips are down he has the know how to put a package together and get down that race track. I think to win in Darwin it will come down to whoever can come to terms with the track surface and weather conditions.

“I was up there a few weeks ago and watched Scott Maclean put down some impressive numbers in his Top Alcohol car so I think the track will handle plenty. Could it be a local Doorslammer driver upsetting the rest?”

From Darwin Keys makes the trek south to Alice Springs Inland Dragway to compete at the Desert Nationals and Round 8 of the Aeroflow Sportsman Drag Racing Championship.

This year he is determined to right the wrongs he experienced at the 2013 Desert Nationals when he was eliminated in the first round.

“We have some unfinished business there. We lost two of our qualifiers due to a problem with the car, which has since been rectified so we hope to hit the ground running this time around. Hopefully we have a package suited to the track.

“If I could wish for one thing it would be to have a big heap of spectators show up on both days. The track is good enough for some quick runs and the club deserves it, as they are all good people. A big weekend spectator wise would be a fitting result for all concerned.”

The action kicks off at Hidden Valley Drag Strip this weekend (July 11-12) with Top Doorslammer, Top Alcohol and Top Fuel Motorcycle scheduled to be on track from 6pm on both Friday and Saturday. Gates open 5pm Friday and 2:30pm Saturday. For more information please click here.

The Desert Nationals commence the following weekend (July 19-20) from 10am on both Saturday and Sunday. Gates open at 9am. For more information please click here.