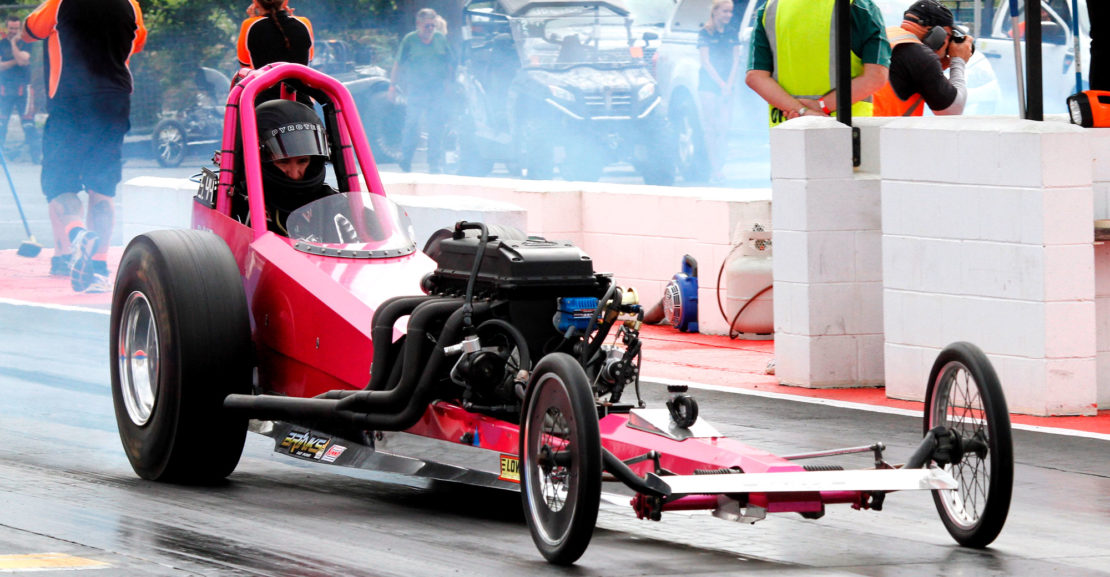 Photo by Phil Reeves In the early years of drag racing, it was common to see car clubs and mates get together and pool their resources to go racing. Times may have changed today, however for Queensland mates Savos Pandelakis and Shane Turley, they have partnered up to go racing just like the pionee…

In the early years of drag racing, it was common to see car clubs and mates get together and pool their resources to go racing. Times may have changed today, however for Queensland mates Savos Pandelakis and Shane Turley, they have partnered up to go racing just like the pioneers did in the 1960’s.

“I’ve known Shane for 20 years and while we might be relatively new in drag racing, we both love the nostalgia front-engined dragster style, “said Pandelakis.

The team race under the name of F.E.D UP RACING and built the front-engine dragster in 2010.

“My next door neighbour is Harry Somer so I got to hear all his drag racing stories,” said Pandelakis. I picked up a lot of inspiration from Harry and that got me interested in going drag racing.

“The dragster was originally purchased from a mate. It was an ex-Graham Tongue Modified dragster, but he couldn’t fit into it so we picked it up!

“The first meeting we won was in 2012 at Charters Towers. From there we decided to change the combination of the engine from a 250 Crossflow to a late model 4 litre Ford Barra engine.”

This change brought more success and drive to the team as they targeted a National record.

They achieved this in 2016 becoming Australia’s fastest and quickest (8.63 at 153 mph) in a naturally aspirated 6-cylinder dragster.

Most recently FED Up Racing won the second round of the Palmyra Raceway track championship in June, and are now chasing the Summit Racing Queensland Championships and currently sit second in the Modified Eliminator points.

“We certainly don’t have the budget to chase the ANDRA Summit Racing Sportsman Series Championship, but when we heard of the Summit Racing Queensland Championship running three rounds in our state, we were wrapped. I’d love to win an ANDRA Christmas Tree and having seen the new copper tree it just makes us more hungry and determined to do well.

“We are 10 points behind Katie Cunningham, who is in the lead and heading to Benaraby this weekend. The pressure is on to perform well. It’s a 10 hour trip for us so we will have plenty of time work on our game plan,” said Pandelakis.

In the meantime, FED Up Racing is actively seeking some sponsorship support as they chase their first championship. Other plans also include building another dragster, as their current one is on the heavy side. Contact Savos via email – spandelakis@ingal.com.au