Cory Dyson refreshed and ready to fire in Mildura

Cory Dyson refreshed and ready to fire in Mildura 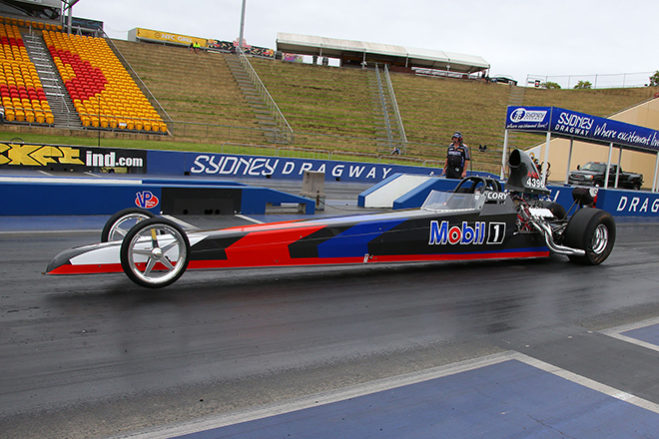 2015/2016 Modified runner up Cory Dyson has taken the opportunity to refresh his engine and slap a new paint job on the Mobil 1 dragster during his extended off season break.…

2015/2016 Modified runner up Cory Dyson has taken the opportunity to refresh his engine and slap a new paint job on the Mobil 1 dragster during his extended off season break.

Dyson is full of confidence coming into Round 3 of the Summit Racing Equipment Sportsman Series at Mildura Sunset Strip, a track where he picked up his first ever ANDRA Christmas Tree in December last year.

“It’s been a very busy off season with the car getting an engine freshen and a fresh new look for the new season,” he said

“And my faithful Mobil 1 oils/Southern Cross Lubes, and Transcal – Fleet Branding Solutions who I can also thank for the awesome new wrap job on the car, and I still have my great crew supporting me at every race.

“I’m going into this event with confidence, but it’s never an easy task with everybody getting faster and the racing getting tighter. So I’ll try do the best I can but there are plenty of good racers out there that could take out this event.”

That event win tied to strong showings at the Australian Nationals and Grand Final lifted the 25 year old to second in the standings but he’s not allowing himself to think about a title run this season, preferring instead to focus on the learning curve.

“(I’m not thinking about the Championship), not at all, I just take it one race at a time and to try and do the best I can.

“The Championship isn’t my main focus at the moment, but maybe next season I may but for now I’m just trying to get some more race wins and to continue to learn as much as possible.

“It was a great feeling (last year in Mildura) holding a Christmas tree at the end of the day, I wasn’t expecting it to be honest, but it was a very tough weekend of racing as it always is in Modified and it was a great feeling to beat some of the most experienced racers that I have been watching race since I was very young.

“It’s a great atmosphere at Mildura, the track is awesome and the track staff make you feel very welcome, a great bunch of people.”

Qualifying for Round 3 of the Summit Racing Equipment Sportsman Series is scheduled for 10am – 5pm on Saturday October 22 and racing from 11am – 4pm on Sunday October 23.