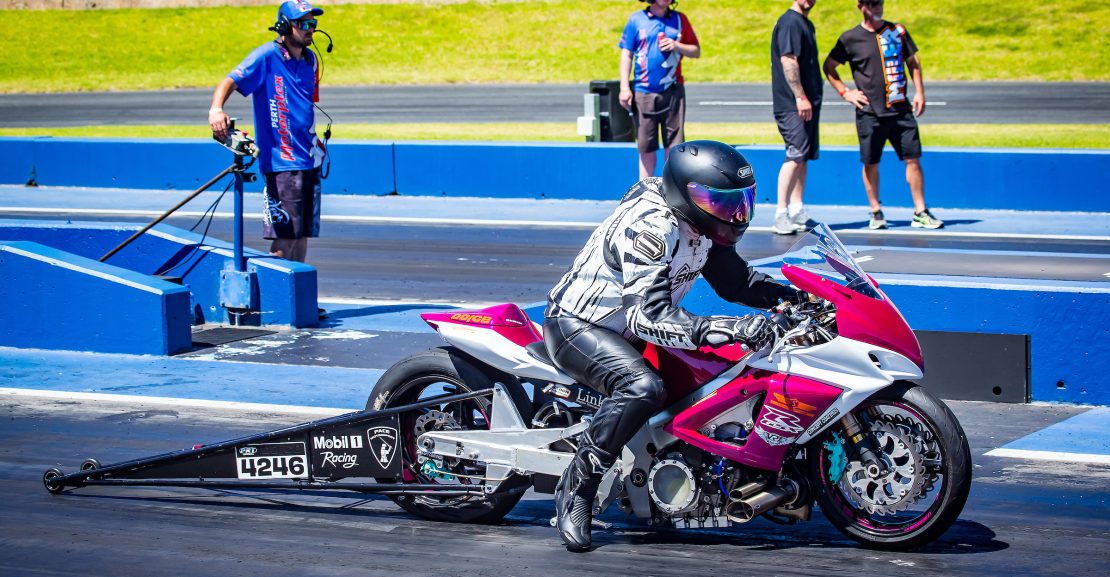 Phill Paton made his come-back to Competition Bike after almost two years away at the weekend’s Goldenstates at the Perth Motorplex – and he did so in record-breaking style.

The November 26/27 event marked the first time Paton had ridden in the Competition Bike bracket since a crash into the Motorplex’s wall in January of 2020.

With a revamped motorcycle and plenty of nerves and excitement, Paton and his crew were ecstatic to have a well performing bike right off the trailer in its very first event, let alone to go on and reset both ends of the national record for his class.

“It is the same bike that I raced and was successful on a few years back before I crashed it into the wall in January of 2020, but with a whole new combination,” Paton explains.

“After that crash, I took some time off to recover and repair the bike, and while I have raced in Modified Bike at a few events in the last season, this was my first time back on this bike and in the Competition Bike category since the crash.

“It has a whole upgraded turbo system, has had a range of chassis modifications, and a different wheelie bar set-up, it feels like a whole different bike and it performed well right from the outset.

“In the first pass, with everything turned right down, it ran only two tenths off the record, so we knew we were going to go pretty well. With a new combo and so long off the bike, it was a real weight off all of our shoulders when that pass went so well.

“We spent the rest of the meeting fiddling with some of the tuning and bar height settings, not really turning it up but instead focusing on getting me used to riding the bike again and getting the launches right, getting the shifts right, making sure it ran straight, the engine and chassis were happy and that it behaved itself.

“One of the runs in qualifying was under the record at 8.15, so we knew come racing a record was to be had. We also knew we could easily make the mile per hour record, as we were only running up to 18 pounds of boost at that stage, and it is tuned for 31.

“In the first race it needed some peddling is it steered towards the centreline but still ran a 8.30, and in the second we ran the 8.14 for the ET record and was just over in mile per hour, so we wanted to back that up in the third race.

“Back in the pits, we had a bit of a discussion and thought that we could try and just stay within the one percent required to back up the record, or we could throw everything at it.

“Given that the two races before I had red lit, as I was focusing on riding after my time away and not on my reaction times, we knew I wasn’t going to get into the final. So, we decided to throw some real boost at it to see what stuck and ended up running 7.86 at 179.20 miles per hour which well and truly backed up the previous 8.14 at 172.70.

“It is safe to say we were ecstatic with that result which made for an excellent weekend. When I got to the bottom end, I knew it felt like a good pass, but the real indicator was when other racers pulled up and said it was a good lap, but then got sheepish about telling me the numbers. It was then I knew my crew was about to break some good news. It really felt like a good number and the bike was a missile, but there was no way I thought we’d just laid down a 7.86 and apparently the celebrations were pretty big on the startline too.

“A lot of it came down to having some fantastic support in the pits all weekend long with the likes of Brett Ghedina from Pace Motorsport who built and tuned the new turbo combination and continued to work with me on the tuning all weekend and Darrin Macdonald who worked on all the chassis modifications and was also on hand to advise on wheelie bar set up and other things.

“The bike just went great start to finish with no real teething problems other than a couple of laps where it went a bit offline, but that might have been me not pointing in the right direction! There is definitely still more left in it too.

“I have to give massive thanks Brett from Pace Motorsports, Darrin Macdonald, my wife Vicki and my son Chris, as well as Niall at Straightline2Ten Panel & Paint who gave the bike its brand-new candy apple paint job which got a lot of positive feedback on the weekend.”

For the full results from the Goldenstates weekend, please go to www.andra.com.au/series/results