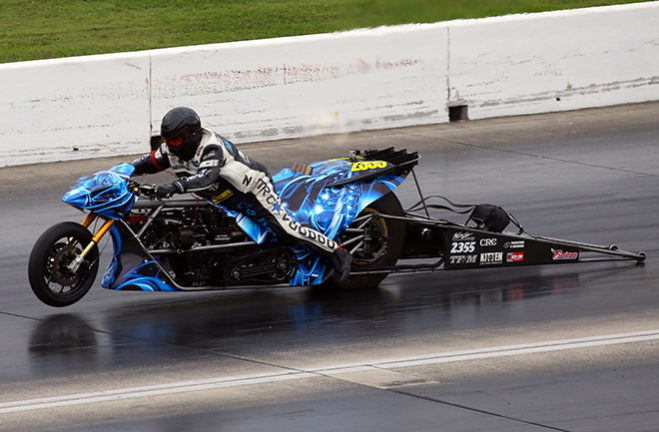 Chris Matheson dusted off his Nitro Voodoo machine for the first time in 12 months recently and will ignite the Australian Nationals crowd at Calder Park Raceway January 23-24.…

Chris Matheson dusted off his Nitro Voodoo machine for the first time in 12 months recently and will ignite the Australian Nationals crowd at Calder Park Raceway January 23-24.

Top Fuel Motorcycle will make its long awaited return to Victoria for the first time since 2013 and the three-time ANDRA Drag Racing Series Top Fuel Motorcycle Champion is ready to unleash the new engine he has spent 12 months developing.

“Our old power plants were fatigued and had become unreliable,” said Matheson.

“We bit the bullet and decided to develop a new improved billet engine, with the ability to take us to the next step in our quest to break records.

“We’ve run numerous 6.0’s, however, that’s not good enough on the World stage, we want to run quicker and run with the top dogs in the States. We need to find 2-3 tenths and it’s going to be a challenge.

“We have only made a handful of passes, none under full power and already the signs are good. You will never beat the leaders if you simply run all the same equipment, we need to be innovators and develop new packages to go quicker.”

A glass half full guy, Matheson is no stranger to challenges. In his five years of Top Fuel Motorcycle racing, he has a record of three National Championships, two runner ups and a third place finish last season on his Nitro Harley in its debut campaign.

Matheson had a major crash in May 2013, which nearly took his life suffering significant injuries when he was blown off his machine at nearly 400 kph (237 mph) at Sydney Dragway.

In his first race back he top qualified, only to be eliminated on race day with oil pressure problems. In only his second race back, he was electrocuted when a cylinder spark plug blew out striking him and putting some 45,000 volts through his body ending in a trip to the hospital.

“After that I knew it was time to make some drastic changes and that I did. The new engines are proving to be very reliable, with minimal maintenance, yet extremely powerful, we just need to calm them down so we can dial them in to the tracks.

“I cannot wait to run at Calder Park Raceway in Victoria, I haven’t been this excited since I first rode the Voodoo machine a few years back. It’s a handful, but a handful of something good, it’s an absolute weapon.”

The Australian Nationals return to Calder Park Raceway for the first time in 15 years January 23-24. Qualifying run from 9am-9pm on Saturday January 23 and eliminations from 9am Sunday January 24. For more information please visit: www.calderparkdragracing.com.au