Cannuli confident he can steal Championship from Phillips

Cannuli confident he can steal Championship from Phillips 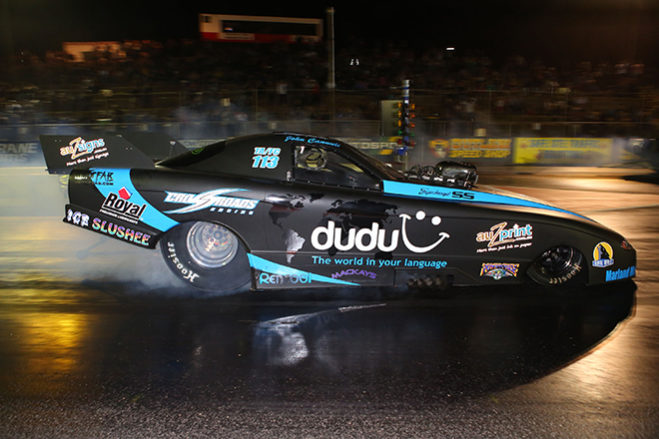 John Cannuli will head back to the US with his crew in tow following the 2015 ANDRA Championship season but not before he tries to reel in friendly rival Gary Phillips in the ANDRA Top Alcohol championship.…

John Cannuli will head back to the US with his crew in tow following the 2015 ANDRA Championship season but not before he tries to reel in friendly rival Gary Phillips in the ANDRA Top Alcohol championship.

Top Fuel and Top Alcohol will headline the annual Easter spectacular for the third year running with title aspirations on the line as Cannuli looks to make up a 68-point deficit on Phillips who has two wins from two this season.

Taking inspiration from Steven Ham’s unlikely run to steal the championship from under the nose of Phillips at last seasons Australian Nationals in Sydney, Cannuli is determined to repeat the feat with three rounds remaining.

“Considering what happened last year I think anything can happen,” said Cannuli.

“There’s still three rounds to go and the proof is in last year when Gary had it in the bag and it got taken out from underneath him. I think we’ve got every chance of taking it from underneath him this year. We’ll be doing our best to make it happen.”

“My Crew Chief Paul Rooks is the man to make that happen. I can’t do any of this without him. For the effort he puts in especially over the last five years he deserves all the credit because he doesn’t get the credit he should!”

Cannuli remained fairly tight lipped about his US return but did say he no longer has plans to buy a car once he gets back there.

“I was going to buy a car over there (in the US) but after this short season here, myself, Paul and our crew will head over at the end of the year and do some runs over there again.”

For now at least the focus is firmly on the Super 3 as the Crossroads Racing Dudu Monte Carlo Funny Car seemingly improves on every lap with the exception of a fuel issue scuppering their hopes against Phillips in the final of the VPW Pro Series 1000 in Adelaide two weeks ago.

That speed bump aside, Crew Chief Paul Rooks is happy with the progress made this season and isn’t fazed by the prospect of needing to make a competitive run straight off the trailer in the one shot qualifier before the single elimination round for a place in either the A or B final.

“We’re pretty much doing the same thing we left off doing last season,” he said. “After we bought the Noonan heads and a few different ignition-timing systems that we’ve been using, that really stepped it up and made it easier to tune and work with. We’re getting pretty close I think.

“Especially with Willowbank we’ve got a lot of laps there. We shouldn’t have any problems (this week), we’ve got a couple of things to test but it’s normally pretty consistent at Willowbank, the track is pretty good and (a good first run in the three round format) is always achievable.”

The Santo’s Super 3 Extreme Drag Race Event will be a one-day Easter Saturday spectacular with Round 3 of the ANDRA Drag Racing Series for Top Fuel and Top Alcohol set to headline an action-packed four and a half hour ‘short and sharp’ show.

Tickets are available online now at just $35 for adults and $30 for students with ID and Concession Card Holders, while children aged 13 and under gain free admission. Please click here for further event information.