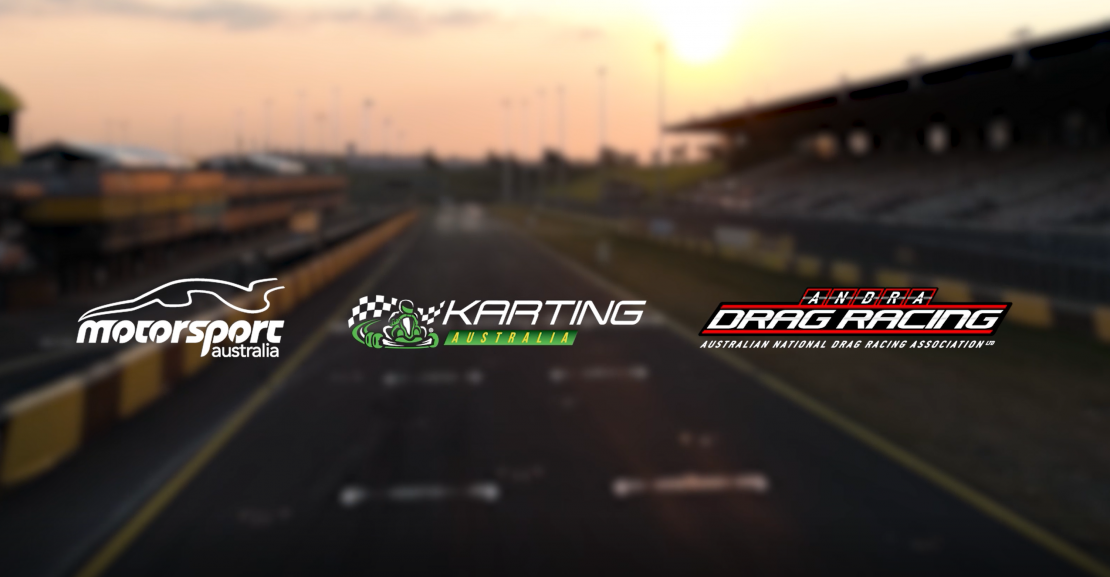 A new study has revealed motorsport’s significant contribution to the Australian economy, with a total gross annual output of $8.6 billion.

With the national economy looking to rebuild after a difficult two years, Australian motorsport is primed to lead the charge for the sporting industry.

Ernst and Young prepared the global study on four-wheeled motorsport together with the FIA and Motorsport Australia, Karting Australia and the Australian National Drag Racing Association (ANDRA). Locally, it was found that the motorsport industry provides $3.1 billion in direct output, while providing $5.5 billion of indirect output based on pre-COVID figures.

The sport also enjoyed support from approximately 18,900 unpaid officials and volunteers, creating a total workforce of 65,700.

The Ernst & Young study looked at a range of factors, further emphasising the importance of the Australian motorsport industry on the country’s overall economy.

Between Motorsport Australia, ANDRA and Karting Australia, the sport has a strong foothold across the country with a reported 188,112 people participating in the sport in 2019.

The financial contribution of each competitor and their input to the overall economy is estimated at approximately $20,000 per year on expenses related to their involvement in the sport (not including vehicle purchases) such as travel, maintenance, food and beverages, as well as race meetings. 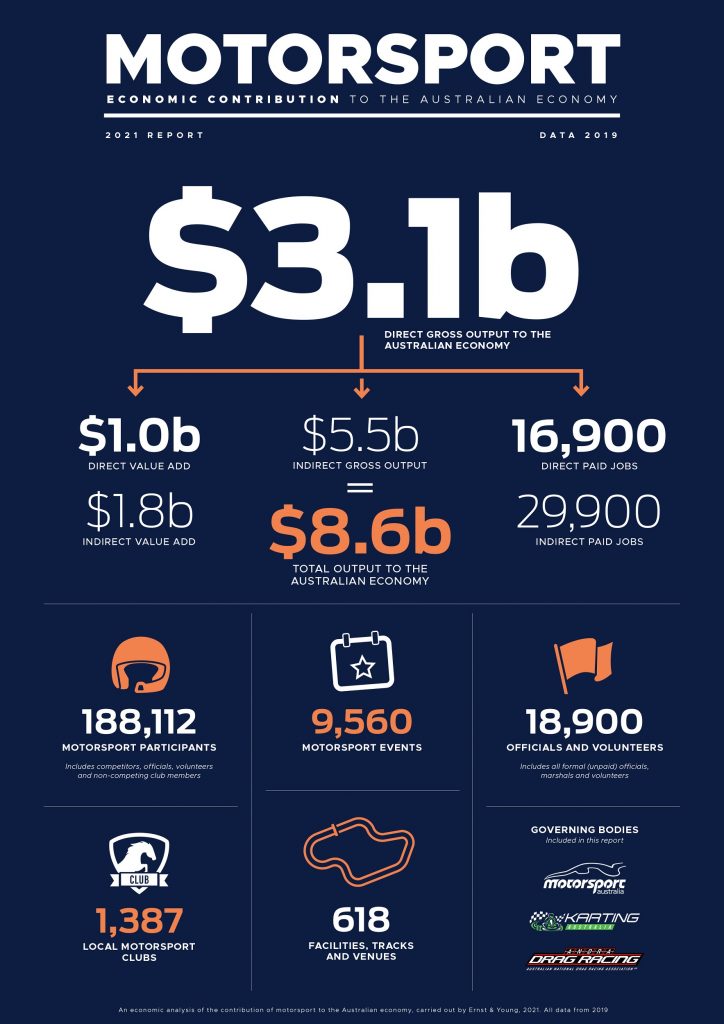 At a state level, New South Wales and Victoria were the biggest contributors in 2019, with the two states responsible for more than 50 per cent of the sport’s national economic value with around 97,000 active participants.

In 2019, prior to the COVID shutdowns, 9650 events were held throughout the country via the three Governing bodies with events in both rural and metropolitan regions attracting thousands of competitors each week.

Given the high level of events, a variety of industries outside of the sport such as tourism, hospitality, retail and entertainment venues at local, state and national levels all benefit from motorsport’s presence, providing a significant and positive impact on a large number of communities.

Today’s findings compare favourably to the most recent survey undertaken in 2014. That survey revealed motorsport had a direct output of $2.7 billion dollars to the Australian economy, highlighting the rapid rise of the sport’s growth, with approximately $400 million more now being spent on an annual basis.

With COVID impacting 2020 and 2021, motorsport has a unique opportunity to play a key role in the economic recovery of Australia, with competitors ready and eager to start racing, travelling and spending in the coming 12 months.

“As Australia embarks on its economic recovery, we know motorsport will continue to be an economic powerhouse, creator of jobs and boost for local economies, particularly in rural areas, where many motorsport events take place.

“This report provides a detailed analysis of motorsport’s strong economic impact and the importance our sport has on so many people.

“Motorsport Australia is ready to welcome a steady return of participants, volunteers and events in 2022, including bringing through the next generation through development programs like FIA Girls on Track and Ricciardo’s Racers.

“Australia is such a diverse country and we are eager to see more people enjoying more motorsport more often. Sport can bring people together and we’re working hard to embrace those who want to be involved and see the potential to grow these numbers even further by ensuring our sport is welcoming and accessible to all.

“Of course, we also have a responsibility to grow the sport sustainably and safely and that’s why Motorsport Australia will have a strong focus on the environment in the coming years. We need to make sure the sport is safe for those involved, but also safe for future generations by minimising our environmental footprint. We will embrace new technologies and make sure we are ready to regulate and support the future of motorsport.”

“We welcome this important report which clearly demonstrates the contribution of motorsport to Australia’s economy at this critical juncture in our history.

“While the findings are no surprise to those who are responsible for steering our sport in its various iterations across the country, being able to hold up a report such as this from such a respected entity is exceptionally valuable and we welcome the assessments by Ernst and Young.

“The local and regional events we have seen held with such success over the last 12 months as we have adapted and worked within COVID-19 restrictions will soon be accompanied by a sustained return to national-level competition and we can’t wait for what is shaping up as a bright future ahead which will continue to make important contributions to the economy.”

“The Karting industry as a whole has continued to grow and provide great economic benefit across the country and we’re pleased to be able have this confirmed through Ernst & Young study alongside Motorsport Australia and ANDRA.

“Despite the challenges from COVID over the past couple of years, our licence numbers continue to bounce back strongly and the majority of the members of our karting industry are all reporting record trading years.

“We are seeing some significant growth in the entry level of our sport and we look forward to continuing this into the future.”