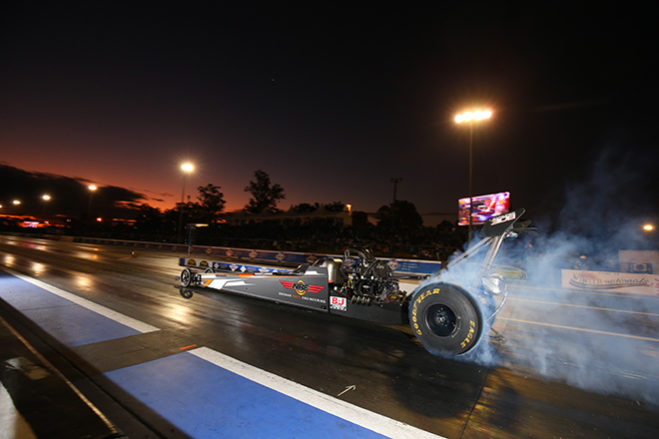 The Fuchs Winternationals always produce big numbers and standout performances. This past weekend 19 new national records were set as the 2015 ANDRA Championship season came to an epic conclusion.…

The Fuchs Winternationals always produce big numbers and standout performances. This past weekend 19 new national records were set as the 2015 ANDRA Championship season came to an epic conclusion.

John Zappia had already run into the 5.60s earlier this season but now he has made it an official record by backing up at Willowbank Raceway with a 5.693 ET in his final win. That run beats the previous record of 5.745, also owned by Zappia.

Al McClure claimed both ends of the of the BB/FCA record with a 6.375 ET and 221.16 mph on his way to a second successive Competition Eliminator championship. McClure held the previous records of 6.394 and 220.04 mph.

Craig Geddes just missed out on the Competition championship, losing the semi final to McClure but he did reset the B/D records for ET and speed with a 7.287 and 186.12 mph. Those records had stood since the 2001 Winternationals when Charles van Ysseldyk recorded a 7.320 and 183.03 mph.

Finally in Competition Eliminator, the BB/GA minimum ET of 7.020 got more than a tickle when Robert Coleman set a new record of 6.949 seconds in Round 2 of his run to the semi finals.

Helping to secure his first ever Super Stock championship, Steve Norman added bonus points for new C/APA records with a 7.834 ET and 173.78 mph. Norman held the previous speed record of 173.34 mph while the ET was set a minimum 7.992.

Brett Glover added the RR/API ET record to his speed record set earlier in the year with a 7.446 in Round 2. The previous minimum was set at 7.500.

Last but not least in Super Stock, Jim Ioannidis reset the B/MSA elapsed time record with a 9.121 to surpass Tony Caroscio’s previous mark of 9.257.

Blair Pennington claimed a new C/AB elapsed time record with an 8.219, snatching the honour away from two-time Comp Bike champ Ross Smith who had previously set an 8.321 marker.

Scott Porter snatched the AA/SC elapsed time record from Rod Harvey surpassing the Kiwi’s mark of 6.352 with a 6.302 of his own.

Also in Super Compact, Matt Lisle set a new AA/OM speed record of 193.69 mph on his way to winning the Winternationals and knocks Po Tung’s 182.28 mph record of the perch.

Kerry Ellis top qualified for the event with a new AA/MB record of 7.429 seconds to crush the previous record of 7.550 set in January 2002 by Damian Martini.

ANDRA congratulates all 13 teams for the record setting performances across an outstanding weekend of racing.