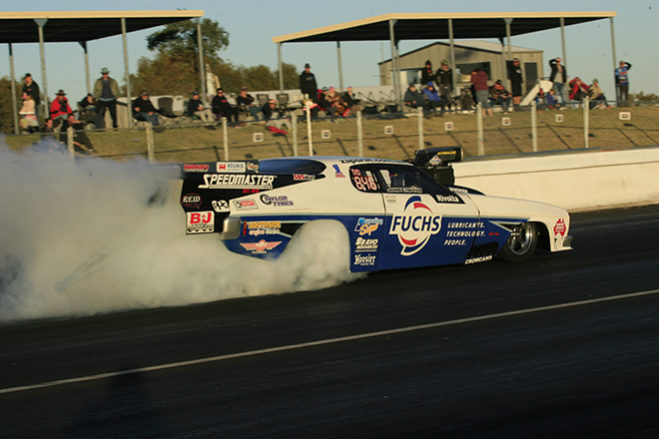 The second leg of the “Central Swing” was a clean sweep for 9 times Champion John Zappia – Top Qualifying and winning the Desert Nationals in Alice Springs, while picking up Low ET, Top Speed and resetting the track 1/8 mile ET and MPH records.…

The second leg of the “Central Swing” was a clean sweep for 9 times Champion John Zappia – Top Qualifying and winning the Desert Nationals in Alice Springs, while picking up Low ET, Top Speed and resetting the track 1/8 mile ET and MPH records.

“I feel like I am living the dream after this weekend” said an elated Zappia, “After a tough month of racing the Zappia Racing team finally got back to our winning ways. This weekend was all about managing horsepower and getting down this regional track, and we have plenty of data to draw on from years of regional track racing – and luckily we got most of our settings right.

“The people of the Northern Territory have been great hosts, and we have thoroughly enjoyed the racing, fans and friends. The fishing is pretty good too, with a treasure chest of mud crabs in the transporter.”

Zappia now leads the ANDRA Championship on 184 points, followed by a re-vitalised Ben Bray on 154 points, Mark Belleri driving the Maurice Fabietti Monaro on 131 points, Gary Phillips who surprisingly failed to qualify on 126 points, and Grant O’Rourke on 114 points as he bows out of competition for the time being.

“We are on track for our goal of winning ten straight championships – a testimony to all the hard work of our crew, team and supporters have invested over that period. The win was great for Fuchs, who are our naming rights sponsor, and great supporters of our team and drag racing in general.

“A special mention must go to our long time sponsor Southside Engine Centre. I turned up at their Myaree workshop with a ute full of damaged parts from the Winters and Kelly and Craig set about carefully bringing them back to race condition.

“The Darwin and Alice Springs meetings are the first time we have run a Noonan’s Ultimate Race Engineering block to compliment the Noonan heads, and the performance and potential is exiting for Zappia Racing going forward. We will do more R & D with this combination and testing with full power at the better tracks should show us what it can do.”

“Benny got the holeshot on me – I had a bad light on that one. But the overall winning margin was 25 thousandths of a second, so there was not much in it at all at the finish line but we come away with the win and the only three second pass for the weekend – the track record for ASID on the eighth mile, and also the overall speed record of nearly 194 miles per hour for this track.”

“Fantastic win for the team and a real morale booster. This new track was really coming around, and one we would like to come back to. It is one of the straightest and flattest tracks in Australia and will be even better when more meetings are run on the track to get the racing surface smooth and full of rubber.”

“Many thanks to our crew that travelled to this remote track, and all our great sponsors who make this all possible with their ongoing support.”

Zappia Racing will now take a short break, host the annual sponsors and crew party, then get the car and engines ready for some testing and R & D before the next round of the ANDRA Top Doorslammer Championship to be held at Adelaide International Raceway on 3-4 December 2016.