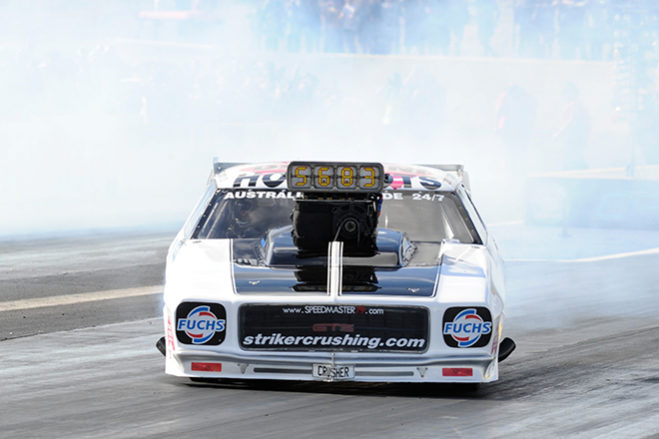 Zappia Racing is heading to Adelaide this week to contest the final round of the 2015/2016 ANDRA Top Doorslammer Championship April 9-10 at Adelaide International Raceway.…

Zappia Racing is heading to Adelaide this week to contest the final round of the 2015/2016 ANDRA Top Doorslammer Championship April 9-10 at Adelaide International Raceway.

John Zappia had the opportunity to wrap the title at Calder Park last month however it was prolonged after he was disqualified for hitting the timing blocks in Round 1. All he needs to do is complete qualifying to take his ninth consecutive Championship.

Zappia, on 472 points, leads Grant O’Rourke on 382, Mark Belleri on 342, and Peter Kapiris on 325 – forming the top performing group in Top Doorslammer.

“We are going to Adelaide prepared as always,” said Zappia, “The last few meetings have shown us how tough drag racing can be – so we have to prepare as best we can and bring our best effort to this event.”

“We would like to express a huge thanks to Fuchs Lubricants who are again our Co-Naming rights sponsor for the 2016-2017 season and the support they have shown us for the past eight championships.”

“At Calder (last month) we struggled in qualifying – managing only fifth with a 5.356 (over 1000 feet) and after running a 4.98 in the first round, the Fuchs Monaro darted sideways at 950ft and crossed the centreline, taking out the finish line blocks, handing the win to Tony DeFelice.

“Those were hard losses for us as a team, after three huge wins in rounds two, three and four. But we hope to bounce back after some good hard thinking and analysis, and we will give it our best shot at Adelaide.

“We are not going to Adelaide just to qualify, but hoping to take home the event and the Championship. It won’t be easy, as O’Rourke and Belleri have shown great improvement over the second half of the season, so we are looking forward to the challenge.

“We would like to thank all our sponsors for the season so far, as without them we could not do what we love doing. Thank you to Fuchs Lubricants, Speedmaster, Dananni Hotshots, Noonan Race Engineering, Hoosier Tires, Southside Engine Centre, Crow Cams, B & J Racing Transmissions, Santhuff Shocks, Bravo Resources and the many supporting sponsors that help out each year.

“Looking forward to seeing as many sponsors, supporters and fans in Adelaide and help make this event one of the best in a difficult season.”

Merchandise sales, and meet and greet with John Zappia will be available at the merchandise tent near the Zappia Racing transporter.

The Grand Final will also stream live (start time to be advised) on Sunday April 10 completely FREE and available in ALL locations including South Australia.

Just log onto ANDRA.com.au and visit the Live Stream page on the homepage on April 10 to watch on your computer, smartphone, tablet or smart TV.