Zappia, Ham and Drew take the honours in Darwin

Zappia, Ham and Drew take the honours in Darwin

John Zappia and Mark Drew have taken a stranglehold on their respective Championships with victory in the ANDRA Drag Racing Series at Hidden Valley Drag Strip.…

John Zappia and Mark Drew have taken a stranglehold on their respective Championships with victory in the ANDRA Drag Racing Series at Hidden Valley Drag Strip.

Six times Australian Top Doorslammer Champion Zappia was dominant once again consistently recording quicker ETs than any other competitor all weekend even though by his standards it wasn’t quick enough.

But it was Bishop who beat himself with a red light allowing Zappia to get the win on a 5.877 at 252.14 mph and claim his third consecutive ANDRA Drag Racing Series victory and extend his Championship lead.

“The pressure is off a little bit,” laughed Zappia. “We can afford to try a few things and if that doesn’t work we’re still up there.

“I didn’t know (Bishop red lit). Something weird was going on in staging. I’m looking in the mirror and I thought he’s in; I’m in, waiting, waiting, waiting. It seemed to take ages for the orange light to come on.

“I got to the end and saw he was in front of me and thought he must have got a light on me but I got past him and when I got to the end they said he jumped the light. I had no idea.”

Zappia was somewhat disappointed by the times he ran all weekend despite the fact no one else could get near him.

“The 5.90s (earlier in the weekend) were a bit weird but the track kept getting better and better and we just couldn’t keep up with it,” he said.

“We were too conservative all weekend and should have got after it a bit more and in the end we had to throw clutch at it every run. The track was just getting better than what we were throwing at it.” 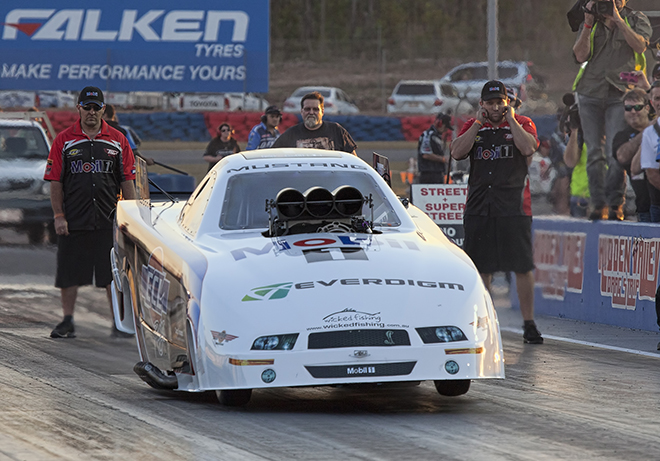 Gary Phillips also extended his Top Alcohol Championship lead despite going down to Steven Ham who proved to be a thorn in Phillips side by upsetting the apple cart and taking his second win in a row at Hidden Valley.

Phillips played it safe in round one on a solo but got out of jail in the semi finals when both he and Steve Reed smoked the tyres. He would experience a violent tyre shake in the final but he still chased the East Coast Lubes Funny Car all the way, however Ham’s 5.567 at 261.52 mph was too good for Phillips’ 5.681 at 260.46 mph.

“We struggled on that first qualifier, it completely blew the tyres off and we were lost,” said Ham.

“We just tried to back it down enough, we didn’t know where enough was going to be. We had a hunch and luckily it went on down there and we could start building from that.

“The same thing happened in the first round but we just had to stick to our guns and run with what we know. Usually we go mid 5.50s and then try to shoot for mid 5.40s and we don’t get down the track.

“This weekend was more about making the car go A to B, try cut a light, get down the track and try take a win. That’s what happened.” 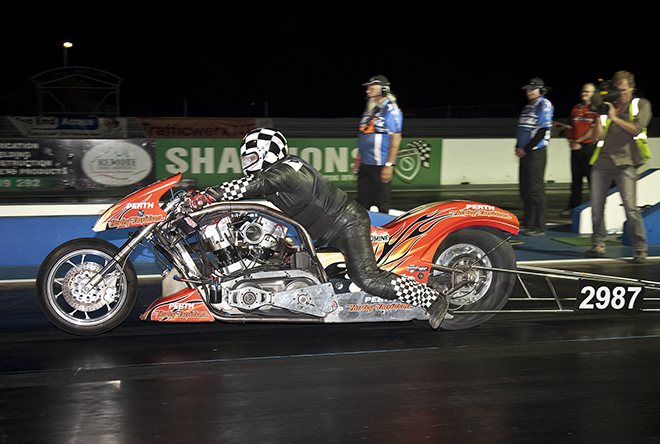 Top Fuel Motorcycle was thrown into disarray when Chris Matheson looked to have been defeated by Terry Burnett who brushed the wall disqualifying his run with a win in the bag.

Matheson however was unable to take advantage of the DQ due to an electric shock he received when a spark plug displaced soon after accepting the green light. He was taken to hospital as a precaution and was reported to be okay.

“The track really came around tonight,” said Drew. “I had to make gearing changes to drop it any lower than 6.40. I was just running it safe; this bike runs 6.50s real easy. I turned it up a little bit and it dropped into the 6.40s.

“I’m real happy, it’s the first time we’ve run every round and it looks like we achieved what we set out to do.

“It is a shame about Chris (Matheson), I really wanted to run against him in the final. I would have turned it up even more if Chris were there.

“I’d like to thank Keith from K Trans, he’s made it possible for me to race over the last five years. Without him I wouldn’t be where I am now. Perth Harley Davidson have come on-board and taken over from Keith so I’d really like to thank them and Keith.”