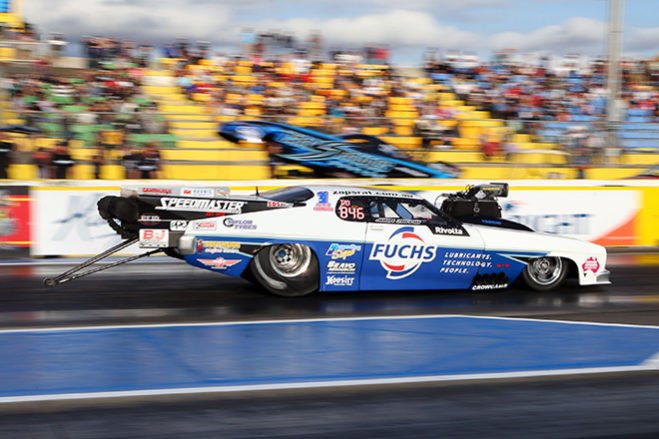 John Zappia has been creating history for the better part of a decade winning eight ANDRA Top Doorslammer Championships in a row.…

John Zappia has been creating history for the better part of a decade winning eight ANDRA Top Doorslammer Championships in a row.

This Saturday March 12 the ANDRA Drag Racing Series returns to Calder Park Raceway for one day only with the penultimate round of Top Doorslammer for 2015/2016.

Zappia leads the title chase by 144 points from Peter Kapiris. A good performance at a track he covered in 5.74 seconds at the Australian Nationals – the quickest ever by a Top Doorslammer at Calder Park – will see the West Aussie wrap up a record ninth Championship in a row.

“We know we just need to do pretty good at Calder and we’ll have it wrapped up,” said Zappia.

“(The chasing pack) are all going to be trying hard, we’ve just got to maintain a reliable combo and keep pushing hard. The harder we go the more pressure it puts on everybody else to step out of their comfort zone.

“We’re not going to back the car off, we’re going to leave it how we had it last time. We’ve got our spare engine in the car at the moment but it’s still in good shape. We ran a 5.75 at 250mph recently so we’ve just freshened that up and it should be good to go.”

Zap has been open about his ambition to win 10 titles in a row but he still can’t quite believe he has won eight. He even contemplated a runner up a few years ago – something anyone who has witnessed his drive to win would assume does not even enter his head.

“When we won five (Championships) and we were second and going for six, I said to Craig Pedley from Striker; “If we come runner up it’s still a good result.” And he said “But that will stuff up going for 10 in a row,” and I thought he’s right.

“You’ve won five, you’re that close to six and then you’re back to starting at zero again. We got through that and won seven and eight and now we’re leading the ninth. A 10th is definitely on my mind, it’s something I really want to achieve and then after 10 we’ll reassess.

“But first we’ve got to secure number nine and anything can happen. Lately we’ve gone from four engines own to two engines this season so we just need to focus and make sure everything is mechanically A1.

“The faster we go the more pressure it puts on all the parts and your maintenance level needs to go up to keep everything running sweet.”