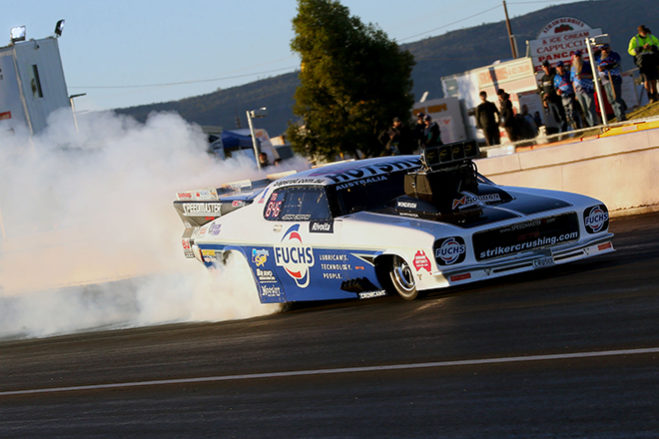 The journey to the final was marked by plenty of exciting racing, starting with the very first round.

In that session of racing there were plenty of gasps elicited from the crowd, with Zappia starting off his chase of the track records with a win against Matt Abel including what was then the fastest speed on the ASID track.

Rookie racer Sam Fenech also impressed, taking out a round one win against drag racing legend Victor Bray. Bray’s son Ben had better luck when it came to making it past the first round with a win over Mark Belleri, while Grant O’Rourke triumphed over Mark Chapman.

The semi-final would see Zappia matched up with Fenech, while Benny ‘the kid’ Bray took on O’Rourke to proceed to a finals match-up against the defending and nine-time champion.

The West Australian would pip the Queenslander in a close race, with his 3.966s/193.97mph effort resetting the track records. While Zappia would cross the line first after Bray bested his reaction time, Bray was never far behind – traversing the eighth-mile distance in just 4.073 seconds at 187.50 miles per hour.

“It feels absolutely fantastic to take the win, this follows a lot of effort from a lot of people,” said Zappia.

“We have a new Noonan Racing engine in the car and we showed potential with one good run in Darwin. We came here though with a different mindset, looking to make the car consistent so we can win races and not just run big numbers.

“We slowed it down – everyone did – because after the crash yesterday, everyone thought ‘nope’, we just have to get from A to B, and as an eighth mile race it puts a bit less stress on the engines and all of that.

“So we backed it off and ran a heap of consistent 4.0s, and then tried to step it up for the second run and that didn’t work. It left harder, but it rattled earlier and got out of the groove a bit, so we ended up with a 4.00s again.

“We thought, do we back it off or do we leave it? We ended up saying let’s leave it and I will drive it again and hopefully drive it a bit better and do the job,” laughed Zappia.

“Benny got the holeshot on me, I had a bad light on that one. But the overall winning margin was 25 thousandths of a second, so there was not much in it at all at the finish line apparently. And we come away with a three second pass – the track record for ASID on the eighth mile, and also the overall speed record of nearly 194 miles per hour for this track.”

While the Group One racing provided plenty of action for the enthusiastic crowd at Alice Springs Dragway, there was also plenty of other action on-show across the day, including championship racing for Summit Racing Equipment Sportsman Series and exhibition passes from both Matt Abel’s Outlaw Nitro Funny Car and Chris Porter’s Top Fuel Motorcycle.

ANDRA congratulates the Central Australian Drag Racing Association and Alice Springs Inland Dragway on a fantastic event and thanks the volunteers for their outstanding efforts prior to and throughout the weekend.

The next round of the ANDRA Drag Racing Series will be held at Adelaide International Raceway across 3-4 December, 2016. For more information, visit www.andra.com.au