Zappia aims for title #8 but Kapiris’ speed makes him nervous

Zappia aims for title #8 but Kapiris’ speed makes him nervous 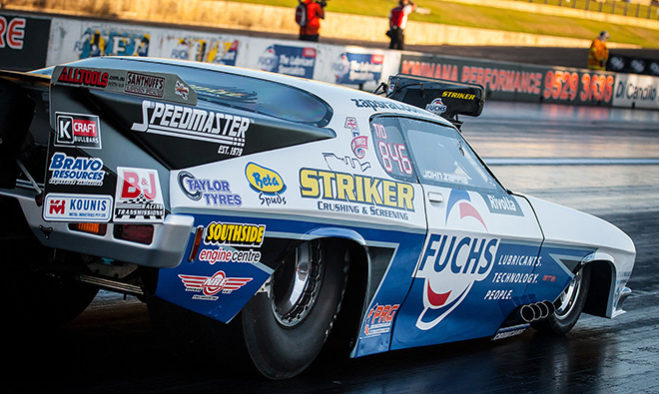 The signs are ominous for the rest of the field chasing 7-time Australian Top Doorslammer Champion John Zappia when Round 1 of the ANDRA Drag Racing Series begins at Perth Motorplex this Friday and Saturday (Jan 9-10).…

The signs are ominous for the rest of the field chasing 7-time Australian Top Doorslammer Champion John Zappia when Round 1 of the ANDRA Drag Racing Series begins at Perth Motorplex this Friday and Saturday (Jan 9-10).

As recently as two weeks ago Zappia drove the doors off his Fuchs/Striker Monaro on a 5.718 second run at the Motorplex showing why he has won seven Championships in a row.

“It was just lots of little fine adjustments,” said Zappia. ”We put the car on a diet and took some weight off the front of the car.

“It’s now wheel standing so we’re launching harder and it’s picking the front end up which is giving us more traction.”

More traction is the last thing his rivals want to hear but Zappia insists the gap is not so great with 2002 Champion Peter Kapiris making passes of 5.78 seconds previously.

“And he runs 5 or 6 mph faster than me,” added Zappia. “I’m not that comfortable. Anything can happen, whether I don’t react quickly or my car doesn’t react quickly, cutting a good light on a pro tree is a difficult task.

“At the level we’re at the car is less consistent because it’s on the edge, it’s closer to the edge where as we could run 5.81 or 5.82 five years ago within a hundredth every pass.

“But now it’s got more power so we’re closer to the edge and we’re trying to go a tenth quicker consistently so we may have to slow the car back to mid-5.70 to high 5.70s to try get that consistency.”

Zappia will be one of 16 drivers at the Home Group WA Nitro Slam vying to draw first blood in a shortened six-month season as the Championship returns to a fiscal year calendar.

He knows better than anyone that just one slip up in the chase can have a major impact on the final standings.

“We haven’t always started the best. So our focus really is on getting a good start and having no little silly things going wrong and costing us a race.

“We just want to qualify well and run a consistent car on race day so that we can go rounds.”