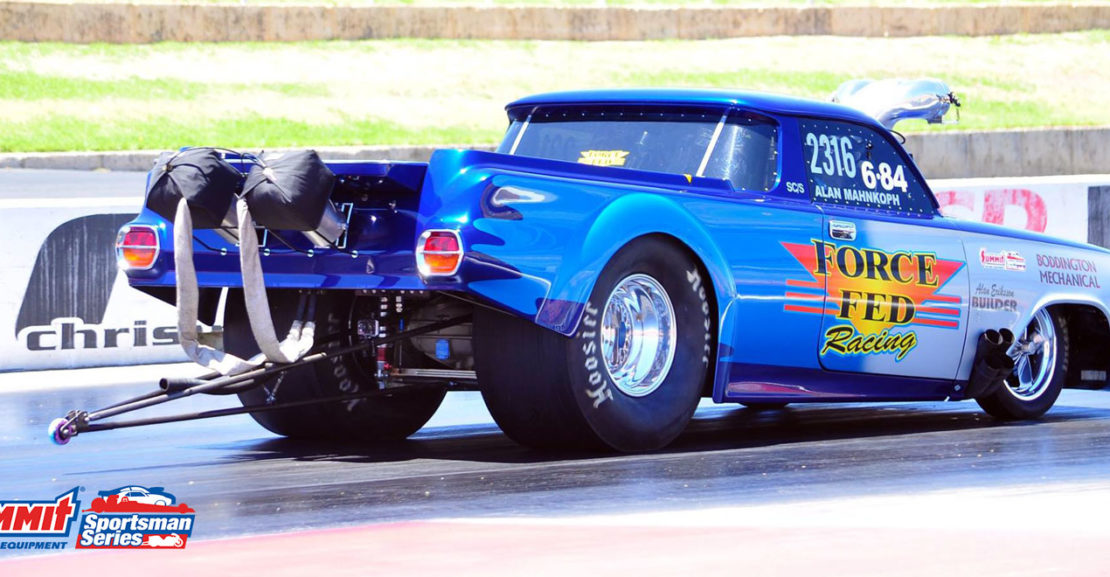 Perth’s Alan Mahnkoph recently had a very successful outing at the 46th Westernationals picking up a win in the Supercharged Outlaws category, and his first gold ANDRA trophy.…

Perth’s Alan Mahnkoph recently had a very successful outing at the 46th Westernationals picking up a win in the Supercharged Outlaws category, and his first gold ANDRA trophy.

If you have been around the sport of drag racing for a while you would recognize the Force Fed Racing EH Holden ute as the “Fireman’s Quickie” once driven by Canberra fireman Geoff Devlin. The car was popular on the Wild Bunch circuit and regularly seen at Eastern Creek Raceway in Sydney and Canberra Dragway.

For Alan and Lisa Mahnkoph, being the diehard Holden EH fans they are, when the ute was put on the market they jumped at the opportunity to purchase it turn key.

“I’ve been drag racing since I was 18 and I got into the sport in Super Street, said Mahnkoph. After that I went on to build a few more drag cars before I purchased the “Fireman’s Quickie” turnkey off Geoff Devlin in 2001. My wife and I hooked up a trailer and drove all the way to Canberra. Fired it up just to make sure it was working and headed off home with massive smiles on our faces.

“We rebuilt the car and then went racing with it in 2004. I raced it for a while before I had an accident in it and basically wrote it off. The car flipped in the braking area and put me upside down into both walls.

“We had to rebuild the car again from ground up including a new shell. There isn’t much left of the original car unfortunately, but we kept the appearance pretty much as it was. Our best performance so far is a 6.69 ET and 210 mph.”

You cannot question the passion the Mahnkoph’s have for the 1964 EH Holden model.

“We just love EH Holdens utes”, smiled Alan (smile). “My wife Lisa has a blown 202 red motor in a ute as well and races it, so what does that tell you. It’s a good family sport and everyone in my family enjoys it.

The Mahnkoph family is currently on a 3000k road trip to Whyalla, South Australia for Round 10 of the Summit Racing Equipment Sportsman Series at Steel City Raceway this Sunday (March 12). This had been planned even before their win at the Westernationals, so the timing is perfect.

Currently sitting fifth on 230 points, Mahnkoph has the potential to move higher again this Sunday. Mark Hunt and Justin Russell are both on maximum 300 points, with Russell a non-starter for Steel City.

The plan then is to leave the car in South Australia and finish off the 2016/17 season at the Summit Racing Equipment Drag Racing Grand Finals at Adelaide International Raceway on March 31-April 1.

So throw in a first ever ANDRA Xmas Tree, a first time at Steel City, and Adelaide International Raceway, and this could all add up to Mahnkoph going home with his first ever ANDRA Championship!

Mahnkoph wishes to thank his sponsors – Alan Eriksson Builder, Boddington Mechanical, Marriner Smash Repairs and his crew for the dedicated efforts over the years.

Gates open at 9am with qualifying starting at 10am

Kids Under 12 Free when accompanied by an Adult

Full canteen and beer booth available and NO BYO

Head to www.steelcitydrags.com for more info