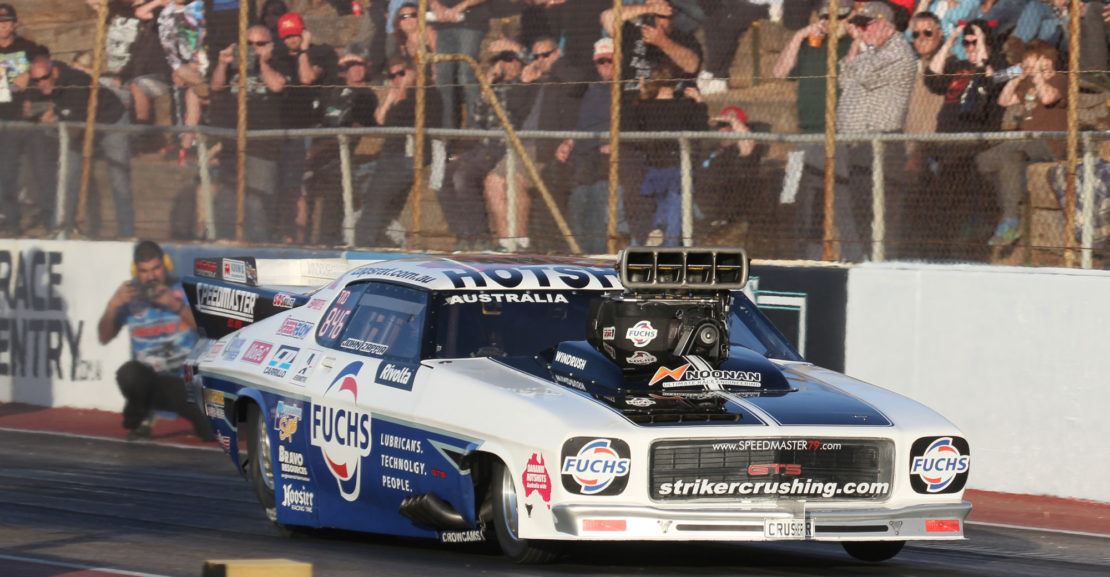 John Zappia wrapped up the ANDRA Top Doorslammer season in fine style at Adelaide International Raceway on Saturday with another victory for the Fuchs Monaro.…

John Zappia wrapped up the ANDRA Top Doorslammer season in fine style at Adelaide International Raceway on Saturday with another victory for the Fuchs Monaro.

“This was a nearly perfect season for the Fuchs team with our last race loss being way back at Darwin in July 2016,” Zappia said.

“Since Alice Springs we have been pushed really hard by our opponents but each time my crew has found the extra performance we need to stay in front.

“Fifteen round wins in a row is really something. We have gone to 21 rounds in a row before we crashed the car at Willowbank so we are excited to try and better that mark, along with Ben Bray’s long-standing 24-round streak.”

The event began well with Zappia recording a strong 4.89 in the opening qualifying session on Friday despite a pedal being required. The time would stand as his quickest for the day as the team threw more power at the car for the second session.

“We tried a bit harder and it rattled hard and got really sideways (in the second session),” he said. “It was getting cold towards the third session and we thought we would sit it out and save the car for the next day.”

Zappia had the luxury of a solo run in the first round, an opportunity to back off the tune up and find a setting that would produce some consistency. A pedalling 4.94 wasn’t quite the number being chased.

“We needed to throw more clutch at it. The track was getting better throughout the event.”

A semi-final match up against Rob Taylor’s new Camaro saw Zappia returning to pace with another 4.89 enough to get past the tough Victorian team. That set up a final round confrontation that had the crowd on their feet as Zappia faced Victor Bray.

Staying with his favoured left lane, Zappia ran his quickest pass of the weekend, a 4.86, to claim the ANDRA Gold Christmas Tree and also win the battle of the oils.

“We left the tune up alone for the final but the air was incredibly good, getting to 198 feet below sea level. Thankfully the humidity didn’t come in so there was no dew on the track and the Fuchs Monaro was making a lot of power and ran the fastest run of the weekend.

New rods supplied by CP-Carrillo proved to be a winner with the Fuchs Monaro singing sweetly throughout the event in South Australia.

“The Noonan Engineering engine combo ran very well and coupled with the superior lubrication qualities of the Fuchs oil, we didn’t hurt any parts apart from a couple of valve springs,” Zappia said.

Zappia was also presented with the ANDRA Australian National Championship Gold Christmas Tree and a Number 10 cake (thanks to ANDRA) to celebrate 10 back-to-back national championships. One of the greatest achievements in drag racing, the streak equals the record for major drag racing championships held by John Force in the NHRA.

Congratulations to all the winners and finalists from the team and special thanks to Mark Hunt, Paul Topping and Frank Intini for their assistance over the weekend.

Currently in transit across the Nullarbor with his two Christmas Trees, Zappia will be back racing in just a few days at the Perth Motorplex season Grand Final.

Competing in the Top Comp bracket, Zappia has shifted his focus from round wins to outright performance for a night that shouldn’t be missed for fans of the team.

“We will be chasing an Australian best time. We have a track record of 5.683 and 256.7mph and we will be trying to push those boundaries,” he said.

“To be honest, we are looking to go really fast. Everything is running really well lately and we are keen to see how far we can push it on the quarter mile with the good air that is traditional for this time of year.

“Top Comp has 20 entrants in it so it should be a really good event to finish off the Perth season and see how quick we can go before we head east again for Nitro Thunder at Sydney Dragway and the Winternationals at Willowbank.”