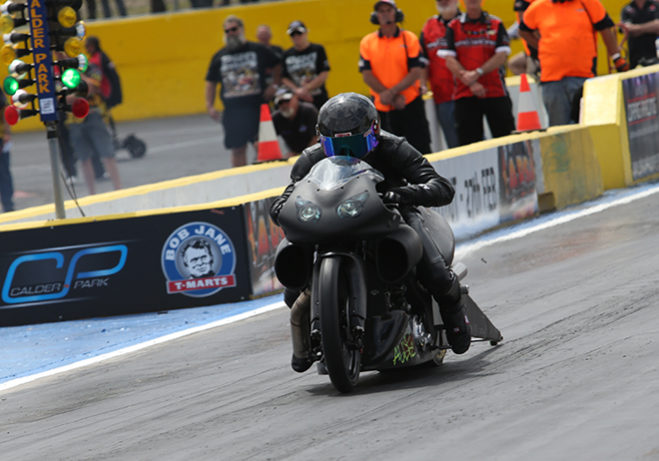 If there was ever a more spectacular way to wrap up an ANDRA Drag Racing Series Championship, you’d be hard pressed to find it given the way Corey Buttigieg effectively secured the 2015/2016 ANDRA Pro Stock Motorcycle Championship.…

If there was ever a more spectacular way to wrap up an ANDRA Drag Racing Series Championship, you’d be hard pressed to find it given the way Corey Buttigieg effectively secured the 2015/2016 ANDRA Pro Stock Motorcycle Championship.

A runner up last November to Scott White in Sydney put Buttigieg in a strong position at the Australian Nationals when the two faced off once again in the semi finals.

Buttigieg recorded a personal best 7.20 ET on that run made even more remarkable by the rear tyre blowing off sending the Victorian sliding from side to side at high speed fighting to keep the bike upright.

Somehow he managed to hold on and despite the damage sustained, won the Australian Nationals final on only one cylinder when Locky Ireland broke at the start line. That win proved to be enough to take his first ever Group One title.

“Winning the ANDRA title was our goal from the start,” said Buttigieg.

“Calder being a local track with friends, family and sponsors watching on the day, we had more than one hundred people supporting our joint team with Mr Bektash.

“With a new bike, new sponsors the outcome could not have been better, but winning in the way we did was unexpected by blowing the tyre off at over 300 kmh and still winning the semi and setting ET record for Calder.

“This gave our friends and sponsors some real excitement for the day, then to go into the finals with one cylinder, we knew the bike was still going to have a chance, after a quick rebuild within the hour, top end and external repairs we managed to get it ready.

“Staging for the finals, I watched, Locky do this burnout and he was in trouble he didn’t have a chance. I waited for the green light and Locky’s Suzuki didn’t move as we expected, so we ran the Geelong Harley Buell through the gears down the track to make sure the rest of the running gear was okay.”

ANDRA congratulates Corey and his team on winning the Pro Stock Motorcycle Championship in what was an outstanding effort at Calder Park.