Weekend of contrasts for TBR at Wintertaionals

Weekend of contrasts for TBR at Wintertaionals 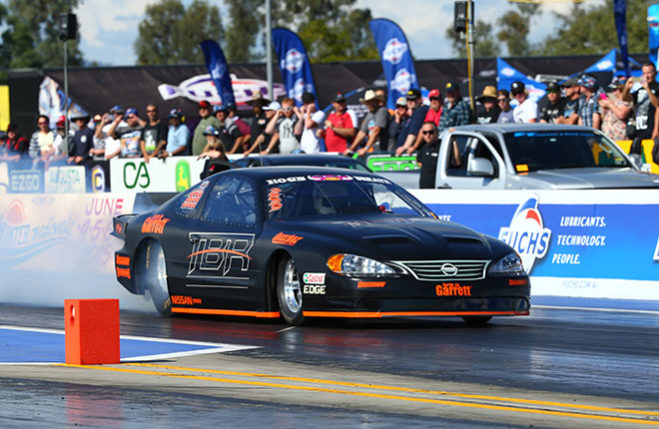 The Winternationals at Willowbank Raceway has seen an emotional weekend of contrasts unfold for the Team Bray Racing team, including new records, success with the new converter set-up, a breakthrough win for a member of the TBR family, and an unfortunate racing incident.…

The Winternationals at Willowbank Raceway has seen an emotional weekend of contrasts unfold for the Team Bray Racing team, including new records, success with the new converter set-up, a breakthrough win for a member of the TBR family, and an unfortunate racing incident.

On Thursday, 14 year old Pine Rivers High School student Madi McClennan – Victor Bray’s granddaughter and Ben Bray’s niece – flew the flag for Team Bray Racing by opening in Junior Dragster with a personal best speed of 114.24 kilometres per hour, with both Victor and Ben very proud of her progress in only her third ever race meeting.

Friday then saw Ben set a new Australian elapsed time record for the exhibition Factory Xtreme bracket while becoming the third fastest four cylinder car racer in the world and the world’s fastest using an SR20 motor with an 6.687 second effort at 207.53 mile per hour (approximately 333.98 kilometres per hour).

On the other side of the TBR pits, Ben’s brother-in-law (Madi’s father) Dean McClennan lost a blower belt in the first qualifier for Supercharged Outlaws and then dropped oil in the burnout for his second qualifying session, forcing him back to the pits. Dean would be unable to take to the track for the third and final qualifying session for his bracket because of suspected engine damage, seeing him out of Winternationals contention.

Saturday got off to a good start, with Ben running the first five second Top Doorslammer pass for TBR using the new converter set-up they have been working on all year during the final qualifying session for the bracket.

Soon after, Ben climbed back into his record-breaking Nissan Altima for round three of the Factory Xtreme bracket. In this round of racing, Ben unfortunately experienced a roll over after hitting the right hand wall and rolling before the car came to a stop on its roof. He was attended to by ambulance staff and was then transferred to hospital where he remains in good spirits and a stable condition with injuries to his back and ribs, with medical staff currently deciding on a recovery plan. Further information regarding Ben’s condition and his anticipated recovery time will be released by TBR later this week, in the meantime anyone wishing to pass on their best wishes can do so at http://teambrayracing.com/wishes/add.php

While awaiting for consultation with the doctors, Ben insisted that Victor participate in the first round of racing for the Top Doorslammer field, with Victor obliging to take on Martyn Dack. In that race, both racers experienced mechanical issues with Victor bagging the blower just before the 1000 foot mark while Dack experienced clutch issues on the startline, leaving Victor to secure a spot in round two.

Following the race, Victor travelled to the hospital to hear the results of preliminary examinations and despite Ben’s further insistence that he continue to compete in the event, made the decision to instead remain with his son as doctor’s continued to decide on a course of action for his recovery.

On the fourth and final day of the Winternationals event, Madison McClennan took to the track Sunday to represent for Team Bray Racing.

Driven by her Uncle Ben’s situation, she went forward to bring home the gold Christmas tree in only her third ever event. By taking the event win, ‘Madi’ also claimed the Louie Rapisarda Trophy.

“It has been a big weekend and this is a very special win, I am very proud to have been able to get this win for my uncle Ben and my grandad, I can’t wait to get on track again. I want to thank my mother Kelly (daughter of Victor Bray) and my father Dean for all their support,” said McClennan.

Proud grandfather Victor said he was very happy about Madi’s success and humbled by the support flooding in for the team.

“Despite the misfortunes that we personally suffered this weekend, the Winternationals this year were a complete barnstormer and we are very proud to have been able to be part of this amazing meeting with a killer crowd and a brilliant atmosphere,” said Victor Bray.

“We would like to take this opportunity to sincerely thank everyone for the well wishes we have received for Ben and our family from both fans and the drag racing community – we have been keeping Ben up to date with all of your kind words and we are sure these will aid in his quick recovery.

“While it has definitely been a tough weekend, Ben and I, along with the whole family, are extremely proud of Madi for flying the TBR flag this weekend and taking home the Winternationals event win in Junior Dragster – this was only her third event and she absolutely excelled from start to finish.”

Further information regarding Ben’s condition and his anticipated recovery time will be released by TBR later this week, in the meantime anyone wishing to pass on their best wishes can do so at http://teambrayracing.com/wishes/add.php