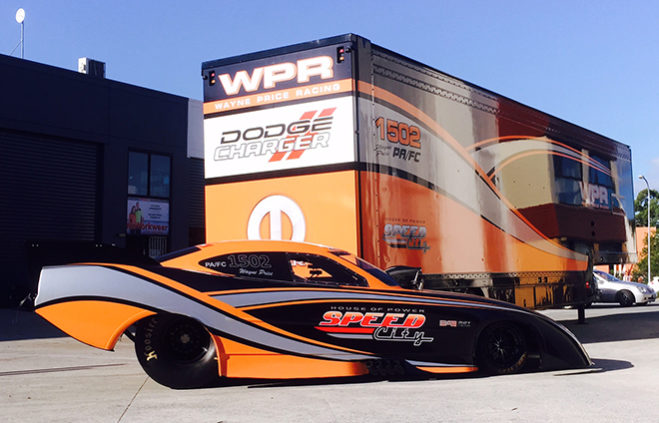 Victorian racer, Wayne Price has teamed up with House of Power, Speed City as the WPR outfit continues to take it to the big names of Top Alcohol.…

Victorian racer, Wayne Price has teamed up with House of Power, Speed City as the WPR outfit continues to take it to the big names of Top Alcohol.

The WPR team have been justifiably pleased with the performance since building their new car which has completed less than 20 passes down the quarter mile, Wayne Price is confident that the partnership with John and Diana Bojec at Speed City will see the team continue to get better.

Speed City are the suppliers of new and used racing performance parts, race cars and trailer sales and are also the distributors of the Speed Racer blower belts used by the WPR team.

The team at Speed City has thousands of pre-owned quality used parts that have been professionally cleaned and inspected.

“We are starting to see some really good results, but we are looking for more.

“As a team, we are happy we reached our first final in Sydney in November and recorded a PB of 5.54.

“We are very excited and proud to be representing the Speed City brand, it helps having such like minded partners in this, and they want us to win as much as we do!

“The whole team now knows we have the car and parts to run into the 5.40-second bracket, we are fully aware of how the bar has been lifted over the last couple of rounds.”