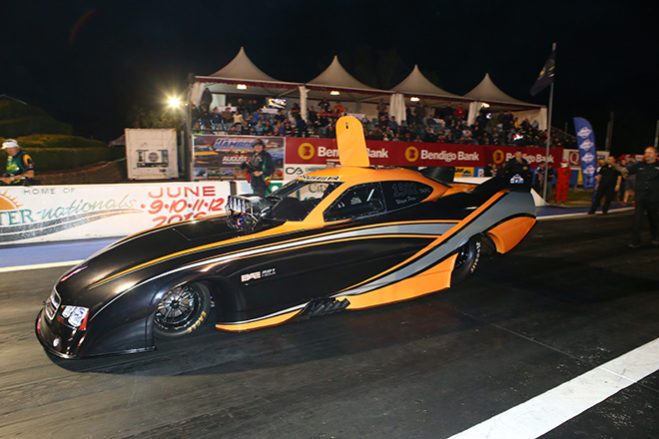 The ANDRA Best Engineered Vehicle Award is a specially commissioned trophy presented to the car or motorcycle judged to be the best engineered at three major national championship events, being the Australian Nationals, the Westernationals and the Winternationals.

“We purchased the Dodge Charger body around two years ago and was going to re-body onto the old chassis but it was built in 1996 and we thought it would limit our performance and safety,” said Price.

“We went through the process of sourcing a new frame from the States but this was going to be an expensive exercise, so we thought we would go for an all Australian build.

“Well known fabricator Richard Botica was given the job of building us a new rolling chassis and after talks with my crew chief Trevor Horwood, they came up with this design chassis to meet the ever decreasing ET’s.

“After receiving the chassis Trev had the job of mounting the tree and body and tin work and finishing the rest of the car off.

“It truly is a work of art and handles fantastic. It is showing some real potential with the limited six full passes we have done.”

ANDRA Technical Officer Colin Brassington echoed the sentiment; “Richard Botica has shown once again that the local chassis builders are every bit as good as their overseas counterparts.”